First time on the Kennet & Avon, and initial impressions are not entirely favourable… but everyone says it gets better after Newbury. The scenery heading West from Reading through Thatcham and Theale is pleasant enough, but the big locks are a bit of a pain.

Locks are (to our way of thinking) best either a long way apart, or close enough that one can roll up one’s sleeves and get stuck in, sending extra lockwheeling crew walking on ahead if possible/available. On the K&A they seem spaced for optimum inconvenience… too far apart to walk on (requiring you to pick up and drop crew all the time), not quite far enough apart to even boil the kettle, let alone drink the coffee. And places where you can actually moor up for a while within jumping distance of the bank are rare indeed,  and in places a flame-thrower on the bow would be more useful than a bow-thruster.

Not only is going uphill through big heavy locks with only the two crew hard and slow work – Biggles merely supervises –  each lock is different. Some have really vicious gate paddles at the top that create a Geneva-like Jet d’Eau that could sink you in seconds, others have turbulence inducing ground paddles. Some have straight walls, some have scalloped walls, and there are a couple of rare turf sided locks with no walls at all. And they’re all different lengths too, with varying gears / hydraulic mechanisms to add to the fun. And some need emptying  again after use. A far cry from the well maintained and usually manned Thames locks! If you can buddy-up with another boat to share the load, well and good (assuming their crew are not gung-ho boat sinkers), but there’s hardly anyone about now the schools are back. 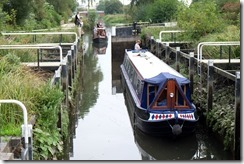 At one point, the towpath between Theale and Thatcham was disrupted, and there were signs from the local fishery in the adjacent vast gravels pit apologising, saying that due to continued predation of their fish stocks despite earlier measures, they were busy installing otter-proof fencing. Which suggests there are loads of otters about, or a few very fat ones. Or some paranoid anglers.

Unlike many towns, Newbury embraces the canal: the bridge in the picture just beyond the lock carries the pleasant and largely pedestrianized high street over the canal. Fresh Orange Juice and croissants for breakfast within 2 minutes walk. Works for us!

1 thought on “Otter Spotting to Newbury”