After Newbury the locks become more consistent, but no less hard work, and the scenery improves too. The car that Sir normally uses needed an MOT so we moored up at Kintbury railway station near to a posh gastro-pub with positively the most expensive Guinness seen outside London. The first mate stayed with the boat and cat (falling instantly in love with Kintbury village and already making plans to move into the Wharf flats) while someone else caught a train home, and sat around a VW garage for a couple of hours while they prodded and poked and pronounced all was well.

Too late to get back to the boat that evening, an evening home alone beckoned. But fortunately our friend Alan Kluckow was having a champagne and canapés reception for a sculpture exhibition at the Coworth Park/Dorchester Hotel just at the end of our road, so the evening wasn’t entirely wasted… 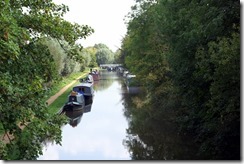 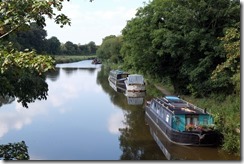 An early start and train back to Kintbury, where we just had to walk into town to sample the butcher and baker (the most divine and expensive Chelsea bun ever). No candlestick maker, but maybe the cake maker counts these days instead. 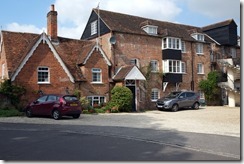 We use a web site Canal Planner to help us know where we are and where we’re going and how long it might take. When you go to the main page it tells you where it thinks you are, in relation to the nearest point on an inland waterway. Most of the time it is astonishingly accurate, on several occasions pretty much coming up with the view outside the boat window. If it doesn’t get it right, it always says we are at Hungerford Bridge on the Thames (the one near Waterloo station). No idea why: it’s quite consistent – guess it’s something to do with the boat’s MiFi internet system.

So there was a modicum of confusion when we moored up in Hungerford Town next to the bridge… this wasn’t the picture that came up. 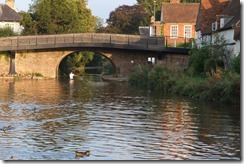 Nice place, Hungerford, the railway really does go through the middle of town on another fine bridge. Even managed to stock up on Sir’s special dietary requirements (no, not marinated mice).