Surprisingly, it’s more interesting than you might think coming back the way you came: you see everything on the canal from the other side, so to speak, and spot lots of things you missed first time round, and the weather conditions will be different.

After leaving Crofton top lock, we soon found ourselves outside the Beam Engines establishment again, end of season – a very different place from the hue and cry of the previous Gala Weekend we’d made a day trip to. Even though we’d been around here several times recently, it’s a fascinating spot in lovely countryside, so no hardship involved.

Second breakfast in the cafe saw us setting out on a short circular walk up the Roman road to Wilton Windmill then via the highly amenable Swan at Wilton for first lunch, then back to the boat at Crofton. Or at least that was the plan. 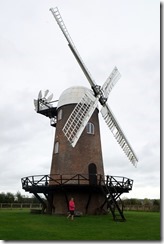 Mapless in Wilton, the Roman road and route to the windmill were no problem. But even the local signs are bit ambiguous about the way from Wilton to the Crofton Beam Engines where we were moored, and the largest lake in Wiltshire lies between the two. 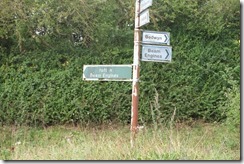 Maybe it was the lunchtime Guinness and scrumpy, but we took the wrong footpath out of Wilton, leading round the wrong side of the lake, with no way back across the outlet to the boat. After an hour wandering apparently in a large circle round muddy fields and a sewage works we were pretty much back at the pub, and found the correct path on Take 2. Oh well, probably needed the exercise.

Overnighting in Great Bedwyn, we were joined again by Joe for the pleasant run down to Hungerford – it’s much easier with another crew member, particularly with someone who’s so knowledgeable about the canal, River Kennet and local gossip.

The route runs alongside the River Dunn, which at one point dives under the canal through a circular weir…

You can see the Gunnera is really dying back now, and if you look very carefully at the full-size picture (click the mouse on the small picture) you can see a grey wagtail watching us drift past.

Approaching Hungerford over their commons, Hungerford Marsh Lock presents an interesting challenge, having a swing-bridge right in the middle of the lock. 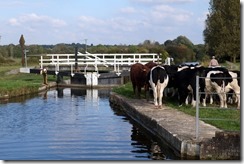 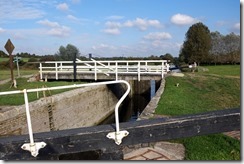 With CaRT’s minimalist approach to mowing the grass these days, it’s bad enough with anti-social owners who let their dogs fowl the lock area without clearing up the excrement, leaving the long grass booby-trapped. But a herd of cows wandering everywhere adds a whole new dimension, particularly the one who turned, reversed and lifted it’s tail over the canal just as First Officer Fran was on short finals to the gate. The bilge pump in the front well-deck had a narrow escape.

Incidentally, if you look closely, you can just see the tower of Hungerford church rising over the distant tree line. There is some debate as to whether Hungerford or Kidderminster church is the nearest to a canal; I reckon Hungerford wins by a few gravestones, but in the interests of political balance, here’s an otherwise irrelevant photo of Kidderminster church taken a few years ago.