We’d decided some time ago that we would moor the boat up for the winter in Cropredy Marina, not just because it’s the ancestral home of Fairport Convention and their festival, but because we’d had a good experience there working our way south in July. And it’s only just over an hour’s drive from home.

Our final couple of days pootling along in indifferent weather (although still very warm) saw us stopping at the Adderbury Pig Place again – not a morris dancer in sight, phew – and Banbury for shopping. We moored up for the night a little north of the metropolis in torrential rain: the first time we’d had dreadful weather while trying to shut up shop for the whole summer. Quite remarkable.

Actually, the stretch of the Oxford Canal from Heyford upwards is lovely, with lots of the iconic lift bridges (although rather fewer now as a couple have discombobulated over the summer. There’s rather a gap in the blog covering when we came down this way: rectification in due course, if only in the archive bit.

Aynho Weir Lock’s a bit odd – wedged in front and back – but a shorter boat just rattles around out of reach of the sides (such as they are). 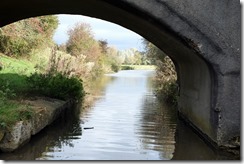 The approach to Cropredy is particularly pleasant, especially when the sun is shining, and mooring up alongside the marina’s service wharf marked the end of a fascinating few months afloat for Biggles and his staff. 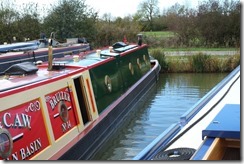 A couple of days collecting cars and sorting stuff out on the boat, and Sir was ready to head back down the M40 in his wheels to check out the home territory after his long absence.

The final few days were not completely uneventful, though. The bow thruster blew up just north of Banbury: subsequent investigations show it is a) serious, b) nothing we did, and c) will need the boat removed from the water to fix. Fortunately (if that’s the word) the marina has just commissioned a new floating dry dock, so it looks like we’ll be one of the early customers. Better than having to spend several days in the winter taking it somewhere else, I suppose.

Then the morning after we arrived,  we turned the heating on, only to turn it off fairly rapidly when it made severe distress noises. Later that afternoon we found the kitchen floor awash with water coming out from under the cupboard. Turned out the heating had undergone a major leak and dumped all it’s water, and running the boiler dry blew that up too. Piper Boats did a lot of running around to get that sorted PDQ.

We’re wondering if Song & Dance is upset at the prospect of a few months alone and not cruising.

So Biggles and staff are back home safe, and already planning the next adventure. And expecting several trips back up the M40 to sort out the various issues that still need resolving. Ho hum.