There were two different falconry outfits at the Odiham celebrations, with rather different approaches, and a variety of birds to wonder at. Albion Historical Falconry had clearly done a great deal of research into the old ways (and incidentally shown that many of them were better than the new-fangled methods of training), while Fistful of Feathers’ approach seemed to be a bit closer to a petting zoo (though that may perhaps be unfair away from events like the Odiham bun fight). 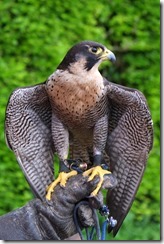 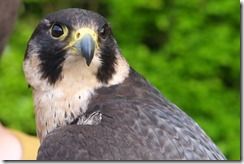 The Captain’s favourite was – as always – a magnificent Peregrine Falcon, 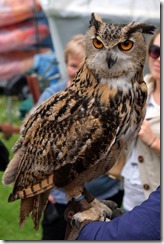 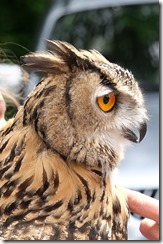 The Eurasian (or European) Eagle Owl has such hypnotic eyes. Apparently there are a few breeding in the UK, but they’re probably escapees/released birds or their progeny.

Barn Owls are always delightful, and this chap was no exception. Having discovered his jesses were no longer actually tied to the log (oops!), he made a bid for freedom and took off for somewhere more amenable to perch: the First Mate’s shoulder. Sharp clawed little chap!

SWMBO was rather taken with the very small and noisily talkative American Kestrel, weighing in at a massive 3oz. The local boatyard chap looked a bit more apprehensive though (as I suppose one would)!