With three additional crew safely boarded at Dapdune Wharf on the Saturday Morning, we set off in pleasant weather through the middle of Guildford and out into the hinterlands between Guildford and Godalming.

With the river being  very busy and a boat full of people, some of whom we hadn’t seen for ages, no-one remembered to take any photos until we moored up at Broadford Bridge near Shalford: a mere 100 yards from The Parrot Inn, where a fairly protracted lunch in the garden ensued. 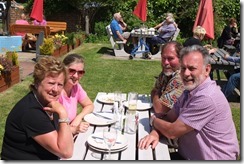 Our crew had parked their cars conveniently close,  in one of Guildford’s Park & Ride establishments, so after another lengthy discussion over tea and biccies, they didn’t have far to walk to get back home. 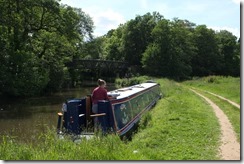 We moved Song & Dance just the other side of the gunpowder loading wharf and the Wey & Arun Navigation junction  (all of 400 yards) and settled down to a peaceful evening. Not much in the way of wildlife was spotted, but the adjacent field was well populated with striking looking Belted Galloways, who were a long way from home. 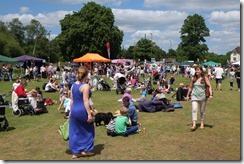 Sunday dawned sunny and warm, so rather than move on, we wandered across to the green for Shalford Village Fete where the sun had brought out the crowds in large numbers. 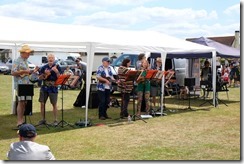 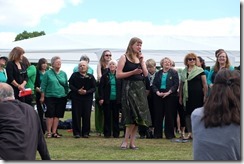 There was a toe tapping performance from BURP (a Ukulele Band from Berkhampstead), and a sterling performance from the rather more local Guildford Vox Community Choir (led by the estimable Anna Tabbush), who include several acquaintances of ours. The latter showed great reserve when their performance was forcibly interrupted by a very distraught young lady (distraught as in “tired and emotional” one suspects) who had misplaced her child and was having a totally over the top paddy. Said child proved to be all of ten yards away, in the arms of a gentleman who was probably her brother-in-law, or at the very least one of her party.