We were rudely woken up on our moorings near Woolpack Bridge at Hayes by the arrival of a very large and rather odd widebeam barge with two outboard motors (!) clouting our rear end attempting to moor next to us. We’d had a surprisingly quiet night up till then: although only about two miles as the crow flies from Heathrow, we weren’t on the flight path, and well inside any downwind traffic. Didn’t hear a peep from any aircraft, nor the even nearer M4 and Paddington main line. Quite remarkable.

And just “halfway from Heathrow to Uxbridge” the only two establishments close to the bridge access were a Sky Sports Pub/Strip Club with an additional Lap Dancing establishment in the car park, and the strangely deserted brick warehouse, so foot and bike traffic on the towpath was minimal. The Woolpack is apparently one of the most famous strip clubs/pubs outside of Shoreditch, and apparently busiest at lunchtime. Go figure. Anyway, once we’d told the Captain that any pussy at the Woolpack probably wouldn’t be to his taste, he spent the time exploring the overgrown paths into the adjacent country park.

Emerging into the morning light, the driver (I use the word loosely) came up to explain that it was his large car tyre fender that had clouted us, not his boat. He then asked if we were staying the night, as his odd looking boat was a floating classroom, he had a second pick-up the next morning from the same spot, and preferred to leave his boat overnight near others who might keep an eye out for anyone who might try and break in to raid the bar. He then asked if we knew what the large brick outhouse was: he’d attempted to wind the boat there once, went aground, and attracted a large number of security chaps who thought he might be attempting to moor up on that side of the canal. 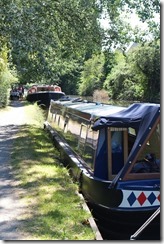 And then his party arrived: a crocodile of about thirty kids, holding hands in pairs just like we used to do, all smartly dressed in school uniform, and not one over 5 years old. Given today’s sensitivities, no close up photos were taken, although we all thought they looked sweet and very multicultural. If you look closely you can see them in the distance.

And as we cast off for the delights of West Drayton and Uxbridge, a thought struck us. Why would a floating classroom for primary school kids have a bar?

And as for the brick outhouse: we’d already had a clue from signs down the canal a bit, pointing to “The Old Vinyl Factory”… we were in EMI territory. The old vinyl factory may now be a smart apartment block, but the new building (which Google Street Map shows as just having a entrance sign that reads “EMI”) would seem to be a repository for rare musical stuff – the EMI Music Archive, no less.