One of the noticeable things about the Nene down from Northampton was the fact that you could invariably see two, sometimes three, sometimes more church spires in the distance, though we rarely passed really close to them as we wound around the apparently delightful but inaccessible towns and villages. So it was with some surprise that came round a corner to find the decidedly towered and unusual St Andrew’s church at Cotterstock right on the waterside, dating from the 12th century. 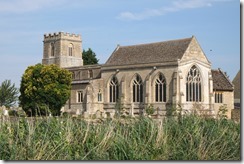 Just down river, the church of St. Mary and All Saints at Fotheringhay, with its impressive lantern, is a well known landmark on the Nene. 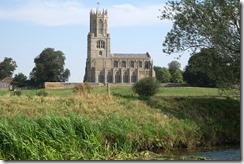 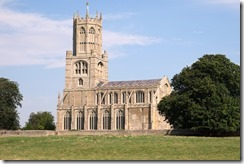 Notable not only for it’s splendid appearance from the waterside, but for the large number of good moorings just below and on the other side of the bridge. The moorings (£4 overnight, £2 short stay) are also rumoured to notable for the speed at which the farmer arrives to collect the fee.

As it was a bit early for lunch, Sunday lunches in the local pub were likely to be mobbed and fully booked, and we were expecting to spend the night here on the way back to meet up with some friends, we merely put someone ashore to locate the Environment Agency water point supposedly installed. Before we’d even temporarily tied a centre rope to investigate, a man appeared out of nowhere… he was a bit miffed that we were only stopping for water once we’d located the tap! Reminded me of the time we drove across the High Atlas in Morocco: you could park in the middle of absolutely nowhere to take a photo, and within 30 seconds a scruffy urchin would materialise out of thin air demanding money sweets or cigarettes with menaces.

As for the tap, it was one of those that only had two settings: off and rocket assisted deluge. Several times the first mate relaxed his grip enough for the end of the hose to escape and jump around like a demented snake showering everything within 10 yards with cold water. Memo to self: must find a better way to wedge the hose into the water tank…

Anyway,  a complete change of clothes later, just under the bridge is the remains of Fotheringhay Castle, where Mary Queen of Scots came to a sticky end. Not much left now (of either of them). 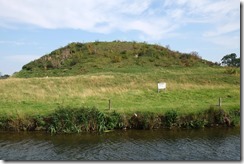