Very much on familiar territory now, leaving the environs of Kings Sutton we were soon in the middle of Banbury for lunch and a whizz round the shops. The Captain had decided it was time to call it a day (for this year), so we aimed to moor just short of Cropredy on the Wednesday night, and make it into the marina pretty promptly on Thursday.

On the way out of Banbury, there’s an odd place which has cornered the market in old tyres. Never seen anyone mooring there, though. 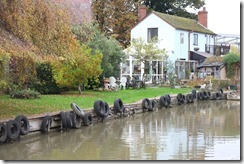 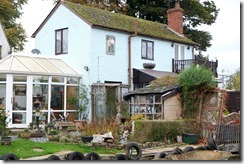 Even odder, it also has a large picture of the residents Dink and Malc on the outside wall: click on the picture if you don’t believe us. They’re always in their conservatory and they always wave at passing boats.

The plan worked and we moored up by Peewit farm. We remember mooring here on the way down the Oxford Canal last summer, when the only bird we heard was a curlew. Perhaps they should rename the place. 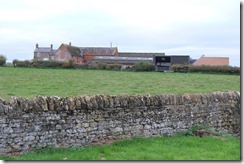 And so to Cropedy, and Song & Dance’s home for the winter. Lots of packing up and sorting out, and in the end Biggles was ferried to his winter holiday home. The staff will doubtless be back in due course to finish readying Song & Dance for the big freeze, but for the moment, it’s back on dry land for a few months. That’ll be different!

2 thoughts on “The End Is Near”