Kingswood Junction is close to Baddesley Clinton, a moated manor house occupied by the same family for over 500 years before the National Trust took it over. Staunch Catholics, the house boasts three priest-holes (although one may be a sacrificial dummy). 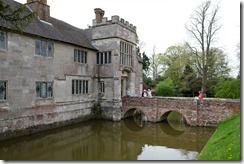 The Captain gave the crew the afternoon off, so a walk across the fields ensued.

With bits added and altered over the centuries the place is a fascinating hotch-potch of architectural styles, nooks and crannies. 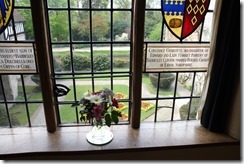 There’s a room with a barrel vaulted ceiling that looks just large enough to hold some splendid house concerts… now there’s an idea! Barrel vaulted lockkeepers cottages are a feature of the nearby Stratford Canal too.

Surprisingly the geology is such that although surrounded by a substantial and full moat, the place doesn’t suffer from rising damp. 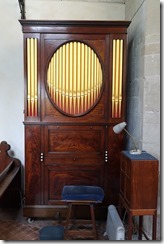 Like all good manor houses, it has a south-facing wall in the garden (this one replete with resident perching duck), and a fine (if seemingly rather thin) local church. There’s a rather fine organ in there – couldn’t help noticing it was on casters. Paging Dolly Collins!