The first officer uses a flight planning program to work out how long it takes to get anywhere, but we were progressing down the Gloucester & Sharpness canal much more quickly than expected. Subsequent investigation showed it was allowing 20 minutes for each swing bridge, when in fact the keeper usually had it open by the time Song & Dance reached it, causing no delay whatsoever.

Frampton-upon-Severn looked interesting: a small linear village strung out along the “largest village green in the country”, with a swing bridge and moorings at each end, but the towpath on the side away from the village. Having failed to find anywhere suitable at the first bridge, and fearing for our chances at the other end, halfway down we came across a sneaky little clearing on the village side that looked ideal: someone else was there before us, and it appeared to have footpath access to the village through the fields. And so it proved.

We were immediately visited by a swan family demanding food with menaces. The ducks kept a safe distance. 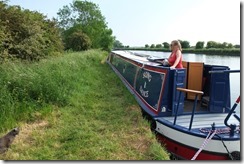 The Captain made his views on the chief cook’s priorities quite plain.

And there was a delightful path through the woods and fields to the village.

The village green was indeed large, and there were some interesting and varied styles of houses. 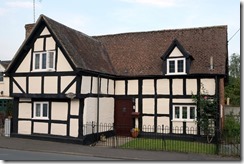 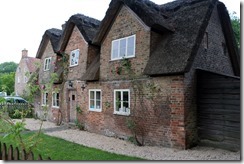 We were slightly puzzled by this lychgate on the side of a large field rather than a churchyard, but subsequently discovered that there was a church at the far end of the path, out of sight, several hundred yards away. 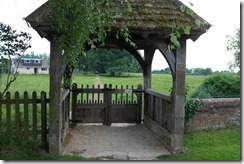 And wandering back after a bite to eat, the chief bird spotter spotted a linnet, which made her day.