The Captain had promised us a day off from boating, and we’d had a vague plan to visit the Severn Valley Railway, which runs from Kidderminster to Bridgenorth. The brochures/timetables littering the Tourist Information places said there was a special event/timetable this weekend. Wandering up to Kidderminster Station on Saturday afternoon to investigate proved slightly surreal: it was some kind of WW2 weekend festival. It was wall-to-wall Vera Lynn, ladies in nice frocks and strange hair-dos, and men in uniforms. The place was mobbed, and it wasn’t clear whether the wedding services halfway down the line on Sunday were re-enactments or for real. We decided that we would save our visit for a more “normal” day!

Just opposite the station was an emporium entitled “CB Radio and Gun Shop” which we found vaguely disturbing. The traffic on the motorways is bad enough without coordinated convoys of gun toting HGVs creating havoc.

The local symphony orchestra was having their summer Saturday night concert in the Town Hall, and the chief cook decided she would like some culture. The programme included Bartók, Vaughan Williams, and Mendelssohn; the band were a lot better than the FO had feared (from past experience), and the newly decorated hall was a splendid venue. The young lady fiddle soloist on Lark Ascending was pretty good too, although the head to neck tattoos and Doc Martens seemed rather unusual in the classical music environment.

A rather late start on Sunday morning saw us at Wolverley Lock around lunchtime, a pleasant spot with a pub right on the lock, a tea bar/ice cream shop on the other side, and a large car park. It was a rare warm and sunny day, and the place was predictably mobbed. 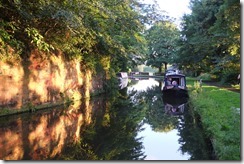 We wandered down about 7pm to see if the Sunday Lunch brigade had dispersed and we could get something to eat, but even though the crowds had diminished, the pub was still forecasting an hour or more’s wait for food, so we went back and ate on the boat.

We knew – from a previous visit years ago – that there had been a folk club at the pub, and finding it was still running on Monday nights, decided to stop over, have dinner in the pub, and go out for yet more music. Rather short on numbers, it turned out to be one of the more unusual clubs we’ve been to, but a pleasant evening ensued; the organiser said he wanted Song & Dance’s musical director to come and sing at his 70th birthday party (date unspecified), and demanded a mobile number. Ho hum.

One of the regulars, who spent the entire evening poring through a large collection of song books and folders, stood up and sung an unaccompanied Blowin’ In The Wind – one of those oh so famous songs like Streets of London, Last Thing on my Mind  or The Wild Rover that were so overdone at the time that no one sings them any more. He did a fine rendition, and sadly, the words are still just as appropriate as they were in the sixties.

Another lesson learned on the way back along the towpath: if you forget to take a torch, and use the Torch app on your mobile to light your way home, it’s a good idea to turn it off when you get there. Or the phone battery will resemble a very flat pancake…