Pottering on further up the rural reaches of the Shropshire Union, we soon reached Norbury Junction, which like Saul Junction, isn’t any more. Once upon a time another part of the system descended 17 steep locks and went to Shrewsbury, but as the first lock is now a dry dock with a building over it, it’ll probably be a week or two before the restoration project is completed. 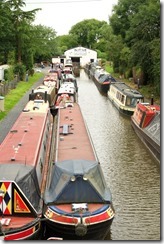 But with a pub and licensed cafe on the junction, and a small hire base, even on a cold and rainy Sunday lunchtime, the place was busy with boats and gongoozlers.

This stretch has several deep cuttings; after all the rain, they’re rather gloomy, dank and discouraging.

Grubb Street cutting is renowned for the bridge with the telegraph pole in the middle; the pole is no longer in use, but we think they used to run telephone lines up the cutting.

Emerging into more open countryside, we moored up and the sun came out for a rare excursion during the late evening.

Despite being unable to attend any meetings of Volestranglers Anonymous while we’ve been cruising, the Captain had been clean of catching rodents for a year or more; he’s been clean of birds for several years. So when he emerged from the bushes with a fledgling blackbird grasped tightly in his jaws, the chief cook was seriously unimpressed and upset. And he really, really didn’t want to let go…

Finally relieved of his burden, he rushed straight back out, and stared meaningfully at a section of hedgerow where there were sounds of other dismayed fledglings rustling around. We confined him to the brig for the rest of the evening, but he’d obviously got  the urge again. Sometime after midnight the cat flap flapped as he returned from his nightly constitutional, but this was not immediately followed by the usual sound of crunching from his food bowl. Expecting the worst, he was found on the saloon floor crouching as if disembowelling a small rodent like object, but the only evidence left was a small drop of blood on the floor… Well at least it wasn’t a fledgling.

Can’t think what’s got into him. 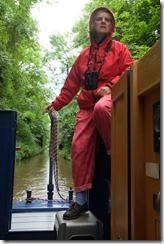 Setting off on a rainy Monday morning we were soon ensconced in the clutches of Woodseaves Cutting. Two miles long, very deep and wet, and frequently too narrow to pass an oncoming boat, it was like a different world. Heavily wooded, dank and drippy, with strange things growing down off the branches, even the grass looked a strange colour: like some Salopian primordial jungle,

Emerging just before the top lock at Tyrley for lunch and a break in the rain, afterwards the flight of five were soon polished off despite a queue of boats coming up. They were the first locks for several days. We suspect a whole bunch of boats had been tied up at Market Drayton – not far from the bottom – waiting for the rain to stop, and they’d all left at once. Busiest we’ve seen things for a while.

Mooring at Market Drayton – nice buildings and town centre but obviously hard hit by the recession, with a bit of a down at heel atmosphere that had improved but a little since our last visit about five years ago – we prepared to head for the shops while dodging the rain.

But before we could leave, the Captain emerged from the long grass, jumped on the boat and proudly dropped a shrew at our feet (he doesn’t seem to eat those). Congratulating him for his kindness and forethought we disposed of the remains while he went ashore again and immediately returned with a mole. This was getting out of hand, and if he catches one of  Ratty’s mates we’ll be seriously upset!

On our return from tea, cakes and supermarket, we half expected to find a pile of corpses at the door, and were relieved to find Sir sleeping the sleep of the just-after without any need to call in CSI. But just to remind us that he was still capable, he went out mid evening for five minutes, and returned with another shrew. Really must find a branch of Volestranglers Anonymous quickly.