Retracing our steps towards Hurlestone Junction, the weather was till hot and sunny. It was a busy Sunday when we went down to Chester, and was much quieter mid-week, so we actually managed to get moored up for lunch at The Shady Oak, near Tarporley. 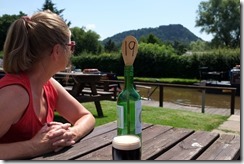 Seemed a much more sensible approach to refreshment than flogging ourselves all the way up to Beeston Castle for an ice cream.

The head cook was rather taken with the cottage for sale immediately opposite, but the Captain’s enthusiasm was muted: it was several feet below the canal water level.

Negotiating the Bunbury staircase locks later that afternoon without any need for shuffling, we gave in to the sunshine not much further on.

Thursday morning saw us passing Barbridge Junction again, before joining the queue for the Llangollen Canal at Hurlestone Junction/Bottom Lock. With a stream of boats coming down, saving us the need to empty anything, we were soon up the four locks, and bedding Song & Dance down in her new home for a few week.

And so Friday saw us sad to be leaving the water, but happily anticipating Sidmouth Folk Week, as we began the complicated process of moving the Captain’s entourage temporarily back to winter quarters while catching up on laundry, appointments and onward travel arrangements. The FO caught a train from Crewe, then drove back in a suitable charabanc to collect the Captain, Cook and luggage. Unfortunately, due to communication difficulties and a minor fiasco regarding logistics, eventually departing the winter quarters for Cheshire at 16:00 on a Friday during the August school holidays proved as bad as feared. Despite the multi-hour delays on the M40 and M6, by hook, crook, sat-nav and going off-piste, Swanley Bridge Marina was finally reached just in time to grab a late dinner at the estimable The Thatch pub nearby.

On Saturday morning the traffic heading back home en famille wasn’t so bad, and by lunchtime, we were back, surveying the mound of laundry, post and things to do.