From the Duddlestone (Tuesday nights place of repose) to Ellesmere you pass through Whixall Moss, then the Shropshire Lake District. The former is a somewhat odd, if flat, landscape, thinly populated, with a few lift bridges, and largely designated as a Nature Reserve. The canal itself has long straight sections, and isn’t – of itself – very interesting. We’d originally intended to stop and follow one of the Nature Reserve guided walks, but suitable mooring spots are thin on the ground, and we ended up saving it for the return trip.

Further on, the canal skirts a series of lakes. The first one – Cole Mere – is supposedly a good spot for spotting the birds, but is set well below the canal, with a wooded hillside keeping guard. Mooring up for lunch, we wandered across the canal and down on to the mere’s perimeter path, but that was still well back from the water, and the trees prevented us seeing much of anything. Ah well.

Mind you, we did see one thing neither of us had seen before: someone taking their ferret for a walk on a lead. The ferret didn’t seem that keen: it was more a case of taking it for a drag. (Cue remarks about the old “pet rock” joke). Apparently it’s not that uncommon: we’re reliably informed that there was one at Sidmouth during Folk Week, and for many years one in Farnham. You can even get you ferret some fancy haut couture kit…

With provisions running short, we decided to abandon the proposed bird bothering walk, and try and make Ellesmere instead. After a pleasant hour’s cruise in improving sunshine, we turned into the Ellesmere Arm and – against all expectations – found the perfect spot half way down. The Captain likes the Ellesmere Arm: cricket club on one side, wide, busy but well behaved and sociable towpath so that dog walkers can be seen from afar, and a nice open wood/hedgerow bordering it, to explore and hide in. 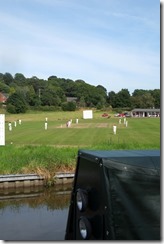 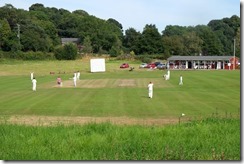 The staff like the Ellesmere Arm because as well as being an amenable spot to pass the night, it’s within trolley pushing/borrowing distance from a large supermarket, and five minutes walk to a pleasant market town High Street, with a decent selection of shops, restaurants and pubs to choose from.

That said, a restaurant we’d previously favoured, down in the cellars below a building in the main square, was now an oddball church. God works in mysterious ways.