After the hustle and bustle of the Llangollen Canal, and Ellesmere  gift shopping, we’d set our sights on a few days peace and quiet on the Montgomery Canal, which heads for eight (navigable) miles down from Frankton locks. Due to a nasty outbreak of great crested newts, the nature conservation people’s rule is strong, and there are significant restrictions on the number of boats.

Assuming you can actually get through to CaRT – a miracle in itself – passage has to be booked through Frankton Locks in advance, and you have to transit between 12:00 and 14:00, so we left Ellesmere on Thursday morning after another quick whizz around Tesco (the Montgomery’s a bit remote), expecting to get to the top lock just after the initial 12:00 rush. The third trip back along this by now familiar section this year passed smoothly enough, and we arrived at Frankton about 12:45 only to find a large queue of boats. Oh well – lunch on the hoof again, holding the boat on a rope!

Once down the four Frankton locks (the first two are a staircase) and past the Western arm – a favourite mooring spot – the other traffic had seemed to vanish. We suspect most people just belt down to Queen’s Head, have a late lunch or early dinner at The Queen’s Head pub, then head back again. Fools. We pottered gently down a delightfully rural canal with lovely views across the countryside, and moored up at Perry Aqueduct – a favourite mooring spot of ours. There’s only room for one boat either side, and we had the place to ourselves. 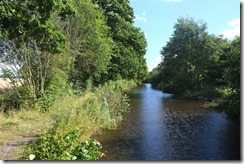 Friday morning, and the sun was shining, so some bramble picking was called for before setting off for Queen’s Head. It’s not all that long since Queen’s Head was the limit of navigation, but you can go a bit further these days. Stopping for lunch, we decided the moorings – next to two busy roads – were a bit too busy for the Captain, and headed off again. One of the roads leads back to what was once Rednal Aerodrome (now an industrial estate, we think),  and on an earlier exploration by road to see if the runway looked useable (some years ago), we counted 17 buzzards riding the sunny day thermals over the tarmac; it’s still seemingly a feature of this stretch of canal that one is never out of sight or earshot of a buzzard or three.

Approaching Aston Locks it was clear that there was a volunteer working party painting everything in sight. With wet paint everywhere, we graciously allowed them to work the locks for us.

They were painting everything black and white, just like the Llangollen Branch of the Shropshire Union, so we asked the chap in charge if he knew why the Shropshire Union Main Line balance beams were painted grey. Apparently our wild speculation wasn’t that wide of the mark. During the war, the canal company ran out of black paint, and their sister railway company had a serious excess of grey paint, so they “borrowed” that. There was so much that by the time supplies actually ran out it had already become a “tradition. It’s now part of the canal’s “heritage”, and they have to keep painting it grey.

Not far beyond Aston Locks one comes to Maesbury Marsh: a much quieter spot to pass a day or two.

The old warehouse on the wharf is now The Navigation Inn and proved to be a fine homely and welcoming local pub, as well as a splendid spot for a piggy dinner. Or rather a cow dinner – a very nice steak.