Eschewing a Sunday breakfast (or more likely brunch) at The Otter, we untangled ourselves from their mooring and carried on South down the Soar in pleasant sunshine. 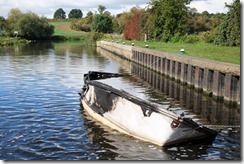 It’s considered very poor form to moor on lock landings unless actually waiting for the lock, but it looked as though this chap didn’t get the memo. The punishment seems a bit harsh, though.

Further down, at Normanton on Soar (formally know, it seems, as Normanton-upon-Soar, twinned with Staines) we came across this jolly looking crowd on a day boat. Song & Dance is only have a maximum of 6 people on board: this one was a third of the size and there are at least 12 aboard. What a swizz. The chap on the bank thought so too, and tried to smoke them off his bit of river. 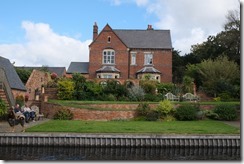 The chief cook fell in love with another house with somewhere to park Song & Dance: the current owners looked kind of comfortable though.

Normanton on Soar looks very pleasant from the river, but chances to tie a narrowboat up and explore on foot are non-existent. The church is a well known landmark. Click on the picture, and you’ll see the sign says “All Welcome”, but the landing stage provided is only big enough for a small rowing boat: even a smallish Tupperware job would be hard pushed to moor. It was Sunday, but we couldn’t go. Ah well.

Shortly thereafter, one enters the outskirts then the centre of Loughborough. It’s not desperately inspiring or photogenic from the canal, but the small basin in the centre not only has various boating facilities, but is very close to a large 24-hour Tesco store. Except it was Sunday, so it was a quick whizz round before 4pm. Although useful, the basin – unlike some other town centre wharves – didn’t’ inspire an overnight stay, so rather late in the afternoon we fired up Song & Dance again and found ourselves a pleasant and peaceful spot out in the country. Near somewhere called Miller’s Bridge No 34 apparently.