The five miles from Sutton Stop into Coventry Basin is not, shall we say, overly scenic, although not without interest. For example, it passes the largest 24 hour Tesco in the country, and the Ricoh Arena, home to Coventry City FC and The Wasps RFC.

We normally cruise just listening to the bird song, but this sunny morning going through the industrial backwaters we had music on deck, on shuffle. It’s always interesting to see how often “random” tracks somehow match the environment, but all the iPod could offer passing the Ricoh Arena was a number from Ian A Anderson, whose lack of interest and/or knowledge of all matters ball-kicky is self-confessed and legendary (and doubtless applies to matters ball-hitty too). Ah well. And then, ten minutes later, as we emerged from a bridge hole, the iPod burst into Brown Sugar just as a huge hoarding came into view advertising the Rolling Stones playing at the Arena in a month or so. Hmm…

In hot sunshine, we reached the refurbished Coventry Basin in time for lunch. It’s an odd place. It might have been rescued from dereliction, but apart from a boat hire base and a few old warehouses that one can’t get to, there’s not much there of interest. 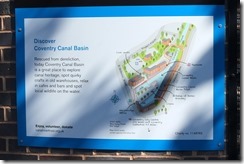 The Canal & River Trust sign (click on photo to “go large”), suggests you can spot quirky crafts in old warehouse – we spotted none, unless a Polish grocer counts – and relax in cafes and bars. Well, there was one small and very basic cafe, and what might have been a night-club that opened up at about 7.30pm for a private birthday party; most of the units were unoccupied, and the place was pretty much devoid of people, passing trade or much interest. Even the “local wildlife on the water” were a few desultory Mallards and a passing Black-Headed Gull. And large chunks were surrounded  by temporary fencing as the cobbles were lifting and becoming trip hazards. CaRT living in cloud-cuckoo land again! 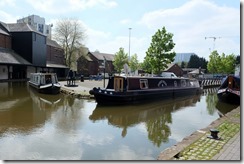 There is an old crane, and a statue James Brindley – a sine qua non of such places one suspects.

Nevertheless, the basin’s very close to the centre of Coventry, so after sampling the solitary cafe’s wares for a snack lunch we girded our loins and set off for town.