Setting off first thing on Saturday, we were soon passing through Polesworth. We’d stopped last time for some shopping and were rather taken by the town, but couldn’t think of an excuse to delay progress this time.

On our way in, we saw a peregrine passing overhead. Not sure if we’re getting better at spotting them, or there are more around. We’d like to think the latter is true: Braunston, Coventry, Leamington Spa (apparently) – healthy population at the top of the food chain implies underlying ecology is doing better.

On our way out, we spotted a very odd duck, which on closer inspection proved to be a wood pigeon trying to swim. Even closer inspection showed it was struggling, almost certainly with a broken wing. It had more-or-less made it across to the towpath side, so carefully backing up we fished it out with our Biggles rescue net (oddly never used in anger), and some passers by put it on the tree lined bank, but we rather suspected it would not survive for very long.

Further along, She Who Must said that we’d passed through the historically interesting Fazely Junction on the outskirts of Tamworth many times, but never stopped to look around… 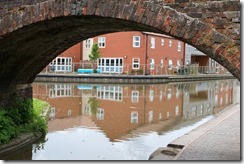 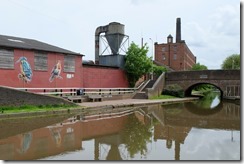 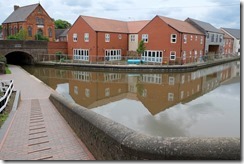 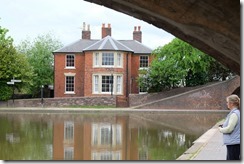 Actually, the old parts are almost entirely hidden by modern buildings and alterations, although someone was rather taken by the fine house at the junction (apart from the roar of Watling Street adjacent to it). 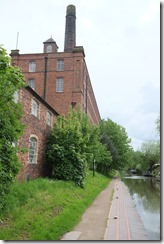 Rather disappointed, we carried on to Hopwas, and consoled ourselves with dinner at The Tame Otter. Saturday night, excellent three course meal each and a “free” bottle of wine for £50 – pretty good these days.  We’d eaten here on the way up last year: Biggles was very interested in the car park and all the outside tables and diners. We were moored right outside, and he took considerable coaxing to come back on board. No problem this time, unfortunately.