Having made it up to Orchard Marina Sunday night, the original plan was for one of us to take the car back home and catch a train back to Northwich. But after a rather disturbed night’s sleep (Orchard Marina is exactly where all Manchester Airport’s Easterly inbounds turn onto finals – all night), and the sun belting down again, making a quick escape seemed a better idea. There was also a possibility of some friends joining us through Harecastle Tunnel if the dates worked out.

Realising that we had unused and still valid Stoke-on-Trent to Northwich train tickets, a call to Festival Park Marina established that they would be happy to let us leave a car there for a week or two – much more convenient given Song & Dance’s position than either Northwich or Sunningdale. So a quick trip to the big Tesco to stock up was followed by driving down to Stoke – a mere half hour – and then coming back by train – a mere several hours – while the cook finished off some washing and prepared the boat for cruising. We even managed to locate the laid back marina manager and compelled him to settle up.

And so, at about 16:30 we set off (late even for us). Or rather tried to. One of the boats next to us – it arrived while we were away – was tied with a top rope to Song & Dance’s central roof cleat. Not uncommon when moored on short pontoons, it helps stop the far/loose end from wandering around in the breeze. Closer examination showed that it was only tied to Song & Dance. Not to its pontoon, the bank, or anything else. Odder still, the doors at the front and back were wide open, but no one was on board, and we hadn’t seen anyone all day.

We retied our neighbour to the boat on the other side – it had no other ropes to tie to the pontoon – and noticed that it appeared to be firmly aground. It was also firmly pressing Song & Dance against the tyres/fenders on our pontoon, wedging us in nicely and rendering us immobile. It took considerable power and rocking around to extract her, but we eventually made it out of the marina and turned South onto the cut. It was nice to be boating again, even if not in the direction we’d originally planned.

Twenty minutes later, as we crossed an open stretch of water – a “flash” where a salt mine had collapsed – a pleasantly brisk breeze sprang up from nowhere, and removed the steerer’s  hat. By the time we’d completed the “hat overboard” drill in a shallow spot with a tricky wind trying its best to make life difficult, the hat had sunk without trace, so with tears in our eyes we said a few appropriate words and continued.

An hour or so down towards Middlewich is a lovely mooring spot called Bramble Cuttings. An old abandoned quarry, on the opposite side of the canal from the towpath and inaccessible other than by boat, it is grassy, sheltered, equipped with some picnic tables, and room for about three boats. We’d spotted it heading North, and hoped there might be room for us on a lovely sunny afternoon. There was, and by six o’clock we were tied up, with the deckchairs out, the wine poured, and preparations afoot for an al fresco dinner were in progress. It’s a hard life. Seemed we were sharing the establishment with four dogs and a cat, but all were well behaved, so that was fine. 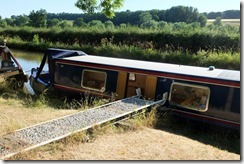 If the old rail-track tipper mechanism was connected to a Waitrose, it would be perfect. 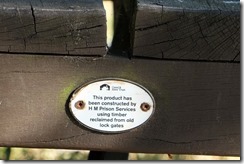 And even the picnic tables were from a sustainable source!