Having found such amenable moorings, it wasn’t hard to stay in Bath for a couple of days. Too many words and too many photos from other people to worry about putting anything in here, so just a few random pictures of some things that caught our eye. 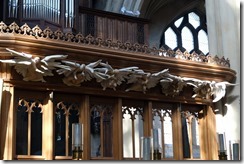 The band of Angels (all playing a different instrument) over the choir in Bath Abbey, and Fran ignoring Rachmaninov’s piano in the Holbourne Art Museum (which also did damn fine coffee). 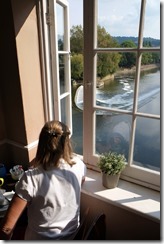 Sally Lunn’s house – the oldest house in Bath, apparently, and the home of the Bath Bun. We couldn’t get in for foreign tourists, so retired to the cafe on Pulteney Bridge. 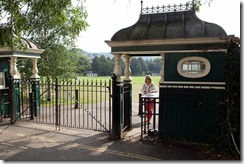 Splendid old-fashioned turnstiles on the entrance to the Croquet Club.

Some nice old fashioned shops too, of which Mr B’s Emporium of Reading Delights is quite the nicest bookshop I’ve come across, with the possible exception of the delightful (but much smaller) Ceilidh Place in Ullapool, which is the only one I can think of with rooms. And just down the road from Mr B’s, a guitar shop with rare second hand guitars, including a Martin at some £25K! Think I’ll stick to my Thornborys.