There are actually visitor moorings right under the weir at Pulteney Bridge, but for some reason CaRT had “temporarily”  closed them, so we opted not to lock down through another half-dozen or so just to turn round on the Avon and head back. Would have been a nice trip, but Shanks’ pony won out this time. 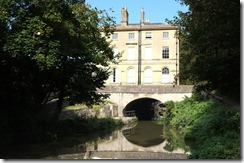 The canal tunnels under the old K&A Canal HQ. There’s a small hole in the tunnel roof leading up into the building, which was used for passing paperwork up and down (and money up, no doubt).

Sydney Street Wharf, with at least one stealth Anglo Welsh hire boat without any markings. Suppose that’s better than mis-spelling the boat’s name! 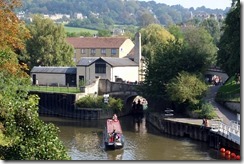 End of the canal, at the bottom of Bath Locks, where it joins the River Avon. The river had calmed down after Thursday’s storm, but we decided to stick with the decision to turn around here rather than head for Bristol. A decision stuck to… another rarity!