Pottering around on the water, it’s easy to get blasé about all the wildlife, even in towns. But things still never fail to surprise. At Abingdon, on sliding back the roof hatch, within that small bit of visible sky, there were overflying – all at once, at different heights – a Red Kite, a Common Tern, a Heron, a Black-Headed Gull and a Wood Pigeon.

Moored at Wallingford, we had low passes by Kingfishers on several occasions, and at one point there were 7 Red Kites performing formation aerobatics as though practicing for the Farnborough Air Show. Didn’t have the heart to tell them that it’s Paris’ turn this year, and anyway the Red Arrows and the Patrouille de France have rather sown up that market.

When Greylag Geese pass closely on short finals with full flaps down, you can hear quite odd loud vibrations from the wing trailing edges – sounds like someone playing a kazoo or comb and paper. Quite different from the whooshing noises from swans in transition from ground to air or vice-versa.

On the subject of swans, they seem to have been taking lessons from London Transport: hadn’t seen one for days, then near in open country near Goring we came across 21 milling around quietly in the middle of the river: they politely saluted and moved apart to let us through. Later, a single swan – probably related to the nutter near Newbury – passed the boat on short finals to the river just ahead of the boat, with a maximum wing-tip clearance from Fran’s head of three inches. Any closer and he’d have had her sunglasses off her head. What is it with swans and her?

And foreigners abound. Apart from Canada Geese (way too many these days) we’ve seen Egyptian Geese (including one pair with five goslings), Mandarin Ducks, and this chap at Wallingford. 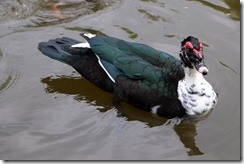 He’s seemingly a Muscovy Duck from Central/South America, and was there last October, so he’s obviously made his peace with the locals.