Leaving Baths Island (or “Windsor Castle Moorings”, as the council has it) on a sunny morning, the trip boats were out in force, providing splendid views of the trendy new apartments on the Eton side of the river. 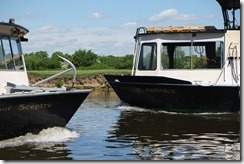 It was clear that Her Maj was at home (the flag’s a giveaway), and appeared to have the builders in. The former was no surprise, as it was the first day of the Royal Windsor Horse Show, held in her back garden.

The first day had free entry for local tax-payers, but they clearly weren’t expecting anyone to arrive by boat, as for miles there were “No Mooring With Extreme Prejudice” signs. Never occurred to us that mooring up for a cuppa was a Serious and Organised Crime… We’re still trying to get our heads round the accusation that Biggles’ cruising schedule might be “organised”. Still, plenty of horses and carts were trotting away in the sunshine. 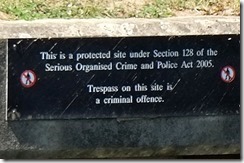 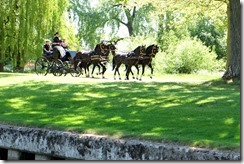 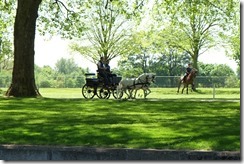 Arriving at Old Windsor Lock, an odd couple were exiting, breasted up: “That’s the way to do it!”

And the lock is a strange affair: almost like an outdoor theatre with tiered seating. 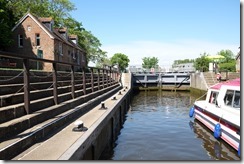 Leaving Old Windsor Lock and the Bells of Ouseley pub, a quick run down through the Runnymede Meadows and past The Ankerwycke Yew ensued before mooring up by Bell Wier Lock and the Runnymede Hotel. Rumour has it there’ll be an awful lot of boats arriving here soon…