Another bright sunshiny morning saw an early departure for an 09:00 reporting time, to climb the three Brookwood Locks, closely followed by the 14 Deepcut Locks. We somehow managed to be the first off, but David & Jane’s Rowan was just behind and joined us for the climb. 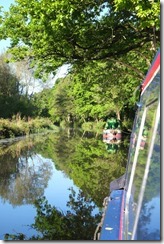 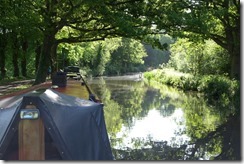 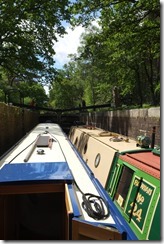 With double width locks, virtually no useable lock landings/laybys and only two crew each, it was going to be a steady slog, but we soon settled in to a steady rhythm, and the female crew were so happy lock-wheeling and nattering that they never wanted the male crews to take turn about, like we both normally did. The locks were already set for us, and not overly fierce, so the day passed in interesting company (Rowan’s skipper was someone in the city, then the lockkeeper at Thames Lock on the Wey Navigation), with the sun shining, the gentle thump thump thump of Rowan’s Russell Newbery engine and the tree-lined seclusion from the world outside inducing an almost trance like meditative state. Even occasional problems like jamming the boats on narrower than usual lock walls or gates that wouldn’t quite open all the way didn’t spoil the relaxed mood.

Emerging at the top and parting company with Rowan, we found pleasant moorings by Frimley Lodge Park, only a few yards from The King’s Head which provided Guinness for the thirst, and a menu that provided precious little incentive to cook on the boat.

The crew slept well after such a day. The Captain slept all day (and spent the night worrying the local Canada geese and goslings, we suspect).