Internet posts, emails and towpath posters were warning of a pair of nesting swans on the stretch of canal around Farnborough Airfield and Eelmoor where the cob was taking his protective duties too far, and “they will attack your boat.” So we were mildly apprehensive when a pair hove into view on Eelmoor Flash near our mooring. 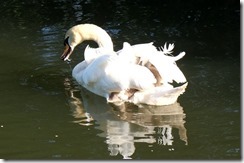 Or rather ten swans… Mum was carrying eight small cygnets on her back.

Or rather she was until she had a good shake and scratch, and they all fell off. The undignified scramble to get back on board was hilarious. Anyway, the father paid no attention to us at all, so all was well.