Setting off from what proved to be the longest day’s cruising this year (some 11.5 miles), we were reminded that a couple of road bridges at Fleet were low with a capital L. Coming uphill, with a full water tank, we had squeezed under the Reading Road South and Pondtail Bridges without much ado. But the latter is lower on one side than the other, and coming downhill you approach it on a bend under another higher bridge, without any decent visibility, and you start on the higher side, so it gets lower as you proceed. Ho hum.

Clearly the only thing to do was to fortify ourselves with some Guinness at The Fox & Hounds, Church Crookham, then some shopping in Fleet’s Waitrose. 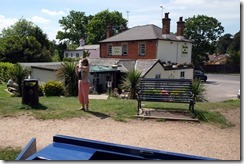 Many, many Tuesday evenings were spent in the back room of the Fox and Hounds in the late 70s and early 80s: it was the home of Fleet Folk Club of many fond memories, and a musically formative time for the first mate. Going inside was weird: the car park was unchanged, but the inside bore no resemblance to the place we used to know. There was also a 45 minute wait for food, so just a Guinness each way it was. Nostalgia ain’t what it used to be!

At Reading Road South out came the tape measure: our air draft seemed to be about 5ft 9in without dismantling the cratch (not to be tackled lightly), the bridge air draft 5ft 10in. Piling the heavy shopping at the front, we set off very gingerly, and just squeezed under. Pondtail was even more nerve wracking, at the far (lower) side there was less than an inch clearance from the cratch, and the underside of the bridge scarred with many scrape marks from boats that hadn’t quite made it. Memo to self: when the Navigation Notes warn of a low bridge, take it seriously! 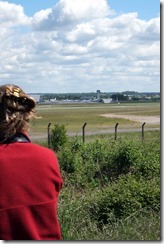 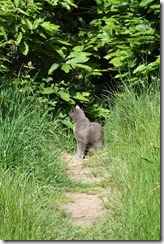 Returning to Eelmoor again for the night, it was comforting to see that Mrs Asbo still had eight cygnets, although they were now too big to all climb into the saddle at once, while Mr Asbo seemed quite happy to watch the rest of his family gobbling up duck food from a respectable distance, with only the softest of warning hisses. Perhaps fatherhood has mellowed him.

The chief cook decided to take her post-cruise coffee up the bank and go plane spotting; the Captain followed close behind but soon decided there were more interesting flying objects in the bushes. It’s a peaceful spot, until 06:00Z, when the early take-offs start…