In order to preserve the precious water levels, passage up and down the Basingstoke Locks is strictly controlled. We’d booked to go down the 17 Deepcut and Brookwood locks on the Friday morning, when the weather forecast was, err, disappointing. 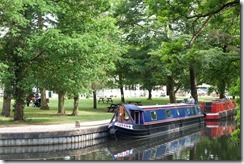 Stopping at the Mytchett Canal Centre to check our booking, whether we were going to expect anyone else travelling down – there was – and to say goodbye to the nice people who had made  the canal such a pleasant experience, we moored up at Frimley Lodge Park and had an excellent meal in The Old Wheatsheaf, about 10 minutes walk away. 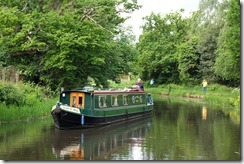 It’s much easier going down wide locks with a second boat/crew, and as expected, David and Kay in Snail O’Wey  hove into view at 9:00. Even though each boat had two crew, it’s still a slow process, particularly as the weather was rapidly living up to the rubbish forecast.

With a brief break on about the third lock for Snail O’Wey’s captain to disappear down the weed hatch and haul out what looked like a jute sack from around his prop (the reason he was going nowhere fast!), the weather was getting wetter and windier, but the Deepcut locks are relatively sheltered. Halfway down we luckily declared a coffee break just as the skies opened with a vengeance, and by the time we reached the bottom of Brookwood Locks the sun was peering out as we moored up at Brookwood Lye for a late lunch, wet, tired and relieved that the worst was over.

Our companions went on to moor at St. Johns with a “see you tomorrow morning”, as we were both due to go down the Goldsworth Locks on the Saturday morning, then Fran coaxed a local friend to pick her up and whip home to collect the mail and some food for Sir.