In recent years we’ve been spending the end of May / early June up north of the border, not hearing cuckoos that often but sometimes seeing their young. Another serenade at breakfast seemed a bit late in the spring/summer to be hearing it call.

A short cruise down to Newark Lock and Priory (where we walked during the Christmas period) and we picked up an additional crew member for the morning. Fortunately, there were no red boards this time! A local ex-morris dancer (but we won’t hold that against her), and partner of a serious bird enthusiast, Pauline concurred that it seemed late to be hearing cuckoos in Surrey. Global something-or-other no doubt. 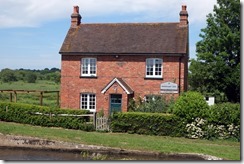 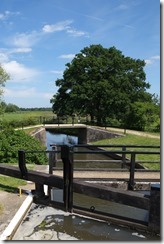 This stretch of the navigation is truly delightful, meandering through meadows and woods  between Pyrford and Ripley, then around Send and Sutton Court, rarely coming close to civilisation. Papercourt Lock is pretty much in the middle of nowhere, although there are a few boats moored here. The New Inn at Send appeared just in time for a thirst-slaking drink and late lunch. 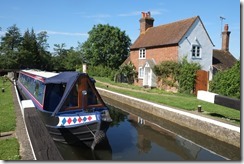 The Worsfold Gates (a flood lock) were open, and the remote Trigg’s Lock saw the arrival of Chris the lock keeper/lengthsman, who we had been primed to say “hello” to: he and his missus are good friends of some other old friends who have been following the Captain’s progress. He told us about a good mooring spot near Send Church Bridge (from which it appears impossible to walk to Send Church), with the grounds of the old Getty estate Sutton Place on the other side.

With just the occasional light aircraft heading out of Fairoaks for their local training area it felt wonderfully remote and peaceful: not even many towpath users. It occurred to me that I must have flown over this neck of the woods hundreds of times in a past life without ever realizing what a lovely quiet and seemingly remote stretch of river/country was here, so close to home.

And so we end the day moored three miles going on one million miles from the middle of Guildford. Well fed, still some red left in the glass, cat asleep; glorious evening sunshine, a roe deer grazing 20 yards away, a fly past from a flock of geese, fish are jumping (and the …) and the iPod shuffle throws up Burland singing The Blacksmith. Perfect.