A pleasant wander through the Guildford – Godalming hinterland, and we were soon at Catteshall Boat House and lock. Tied up abreast in the middle of the canal, it started with a pump-out; then we remembered that we needed a new Calor Gas cylinder. Then, being so close to the diesel pump it seemed rude not to partake, and Song & Dance was rather emptier than we suspected, taking on over 120 litres of fuel. A rather expensive pit-stop.

Half a mile further on, moored up on Godalming Town Wharf and conveniently situated for Sainsburys and Waitrose, we found (a) we were out of wine and (b) the latter had a special 25% off wine if you buy in bulk.  Another expensive pit-stop. With the old credit cards licking their wounds we went for a wander round town.

Our knowledge of Godalming is really down to either a quick whizz round the ring road on the way to Winkworth Arboretum, or occasional visits in the dark for the estimable GBH Ceilidhs to the Borough Hall (which is just over the bridge on the way in) . So we were rather surprised to find that there was quite a lot of town centre we’d never seen, much of it pleasant and of some vintage. 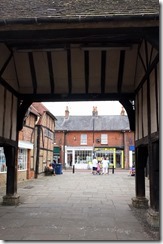 As well as satisfying the chief cook’s shopping urges, a quick tour round the Museum ensued: a fascinating building as well as interesting contents. It’s normally closed on Mondays, but an old friend, archivist and – it must be said – Morris dancer, was working there that day so we had a private tour. (That’s her peering at a heavy tome on the Museum web-site).

We were all really rather taken with Godalming, particularly after visiting the eclectic and infamous Record Corner. 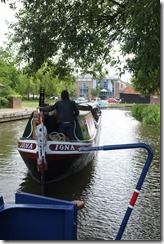 Moving across from the wharf to more amenable moorings on the towpath, another thing that hadn’t occurred to us was that horse-drawn barges not only have a horse a long way in front (that’s Maisy above with her mistress) , but need someone whose job it is to lift the rope up and over obstructions such as moored boats. Unwarily emerging up on deck through the rear hatch at an inopportune time could result in an epitaph even more bizarre than ending up as duck food or impaled on a swan. Still, it’s another good reason for keeping the roof clear of obstacles.

We’d stayed on in Godalming another night, vaguely expecting a visit from Fran’s niece which didn’t materialise. But no mind, it’s a nice place to mooch around, with plenty of supermarkets, shops, eateries and charity shops to keep the crew interested.

1 thought on “Mind Your Head: Horses Ahead”