Moored up in pleasant countryside just North of the the urban delights of the Leighton Buzzard/Linslade metropolis, we rued our fate-inviting observation that there was hardly any boat traffic around, as loads of Wyvern boats went steaming past at OMG O’clock, running late for their 9:30 handover. Actually, we must be approaching the school holidays, as quite a few other boats were on the move as well – perhaps heading home for some peace and quiet in August.

Even without that, it’s not exactly quiet, because there’s a long gentle curved three mile stretch of the A4146 between two roundabouts. On exit from said roundabouts, the owners of high-revving powerful motorcycles seem to find it a perfect spot to demonstrate just how amazingly small their penises are. Rudely awoken several more times before elevenses, and with several further demonstrations during the early afternoon, the locals must be a bit fed up with it – even worse than Mr Branson’s Incredibly Noisy Trains.

Setting off, we soon passed The Globe Inn, a well known watering hole, and started running alongside the railway again. And speaking of trains, this stretch, through what was quiet countryside then, received some unwanted publicity back in 1963.

The low point of this section of the Grand Union is Milton Keynes (no jokes necessary ), but before reaching it (is it called the bottom pound?) there were still a few locks to go, including Soulbury Three Locks. Maybe it was the proximity to transport, but all of a sudden we had a lot more boats moored up on the towpath for the duration: couldn’t see some them moving every two weeks. 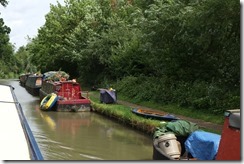 The canal widens out and becomes almost river-like for a while, but while we suspect that Muddy Waters was named in honour of that legendary bluesman McKinley Morganfield, it was kind of appropriate here too, especially as the pound was a bit low.

At Soulbury Three Locks, there were some CaRT volunteers actively trying to manage the traffic into sharing locks to preserve water (but fortunately still no mention of the R Word); it was certainly pouring all over some of the top gates. 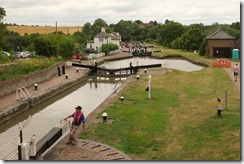 We can understand why some boaters clutter up their roof with supplies of wood, coal, bicycles and the likes, but one of the things that constantly amazes us is the number of boats looking more like waterborne Rag & Bone carts, carrying every imaginable piece of scrap wood as well as all sorts of rubbish of little conceivable use. Sort of mobile landfill sites, really: a couple of (relatively tame and tidy)examples passed through while we partook of lunch at the conveniently situated but oddly named pub The Three Locks.

Rather delayed, we ended up passing through Stoke Hammond lock and, needing milk, called it a day and wandered into the village for supplies. Only one lock to go to the bottom pound and the delights of MK, but still within earshot of the minimally endowed motorcyclists, sadly.