Climbing up to the Aylesbury Arm junction, then starting back on the descent, Tuesday saw 13 locks pass slowly: quite enough. The journey is quite pleasant, with views across the Chilterns to Dunstable Downs and the like. 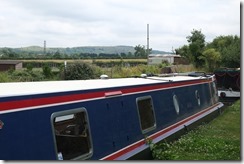 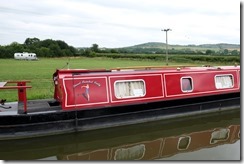 The rather fine paintwork on Sweet Painted Lady was reminiscent of the old WWII Bomber nose art, particularly given the old Airstream caravan parked in the field.

Water had always been a consideration around here, and at several places the canal company built a second, parallel narrow beam lock, partly to improve traffic flow, but mainly so that solo narrowboats didn’t waste as much water. The locks are long disused, but the double-arched bridges are still there.

With the slowly increasing distances between locks as we come off the hill, the Chief Engineering Officer had time to think, and was getting concerned that we needed an engine service and oil change. A phone call down canal to Wyvern Boats – the local hire company – established that they had the bits and would be happy to accommodate us as long as it wasn’t one of their change-over days, so we arranged to slow down, and arrive at their wharf mid-morning on the Thursday for a few hours engineering TLC and thumb-twiddling.

Stopping the previous evening near Grove Lock, where there’s a pleasant Fuller’s pub serving food, it was clear that CaRT’s towpath maintenance had gone awry. We got moored up eventually, but with all the gardening required forgot to take any pictures.

Memo to Captain: we need a few extra items for the ship’s inventory, sir. 1 scythe, 1 strimmer, 1 pair of shears, 1 flamethrower… 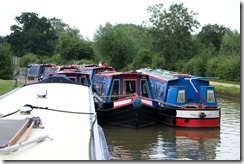 Since leaving Cropredy (at what seems a very long time ago) we’d seen very little boating traffic apart from sunny weekend cruisers on the Thames and the occasional travellers like us. As it was now mid-July, some schools were already out, and Wyvern had quite a few boats gathering dust on the wharf we wondered if the hire boat industry was in terminal decline. But no. Wyvern said they had 35 boats, so there were about 25 out, and nearly all their customers headed North as there were so many locks heading South (as we knew!)

Wyvern’s wharf is pretty much in the middle of Leighton Buzzard, and with ten or more boats expected to arrive the next morning long before the Captain and Cook normally stir themselves, after a wander round town and checking out the cook’s favourite supermarket, we beat a hasty retreat a little down the canal to somewhere likely to be less chaotic.

1 thought on “The Other Kind of Buzzard”