We had a loose arrangement to meet up with some friends on Monday further upstream at Fotheringhay, and still had a fair way to go. We’d also hoped we might manage a trip on the Nene Valley Railway, so a prompt departure from Peterborough was called for if things were going to work. 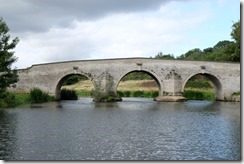 It was a pleasant run on a Saturday morning, with plenty of people out and about. The river winds round and round here (who mentioned oxbow lake formation?), and at Milton Ferry Bridge the sun started to come out. 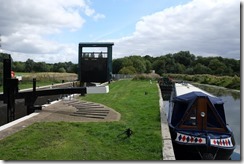 Some convenient bollards in the weir stream at Alwalton Lock (no relation!) enabled a quick lunch. The river runs close to the railway line quite a lot, and several times we’d heard the unmistakeable sound of a steam engine. But passing under the railway near Orton, we saw a stationary train by the bridge with the engine dribbling a bit of steam but seemingly not going anywhere, and wondered if it had broken down. 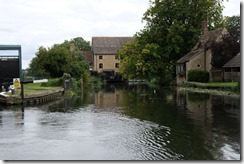 Water Newton Mill and lock is particularly attractive, but suffers from the affliction that both times we have been there it started raining (in one case raining with extreme prejudice), so we pressed on.

Anyway, we made it to the Nene Valley Railway HQ at Wansford Station, and there was enough room on the pontoon for both the trip boat and Song & Dance, so a train ride beckoned.

Our suspicions were correct: their steam engine for the day had broken down. The last trip of the day would be pulled by a diesel engine. Ah well – can’t win them all.