Saturday morning, after rainy and windy night, and no smoky smell from the apparent conflagration, but we needed to be off. The housekeeper had decided that doing some laundry was creeping up the “To Do” list, and one of us needed to pop home briefly to collect the mail and do some other chores, so we’d tentatively arranged to hole up in Northampton Marina on Tuesday and Wednesday. The flight plan program said we were still several days away at our usual rate of progress, so opting for the easy way, we’d pretty much decided to retrace our steps via mooring places we’d already used. Almost immediately we came across a flotilla of paddle-boarders led by the lady we’d bumped into the night before… we told her that the fly-posting had been in vain, as her poster hadn’t survived the miserable overnight weather.

Working our way steadily up stream, lock by lock, taking turn and turn about, we managed to get tied up to the bank satisfactorily above Ditchford Lock, where we’d stopped on the way down. Increasingly of the opinion that it was about time Biggles did his share of windlass winding, Sunday went much the same way, and we had the Friends of the River Nene bit of bank near to the Water-Ski Park to ourselves.

This time there were people falling in the water, and jumping on the trampolines, even though cold and miserable. We did, however briefly, get a splendid autumnal sky. 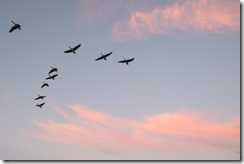 In some places, the river was quite high after the overnight rains, and at least one of the locks didn’t really need top paddles… just a bit of patience! 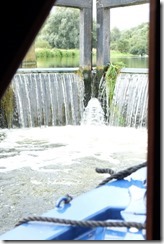 Given the rather uninspiring weather, we’d pressed on and at one point thought we might make Northampton by Monday evening, but as the afternoon dwindled away it became wetter and windier. Faced with strong crosswinds and waves on the wide stretch of water with the delightfully romantic name “Northampton Washlands flood storage reservoir” we opted to moor up for the night before the “sea” passage. There are flood gates at each end which close automatically when things get sticky, presumably to avoid flooding Northampton. 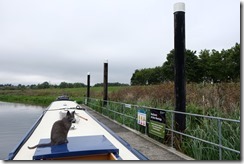 The moorings are not just floating pontoons, they clearly expect significant changes in water level around here! And only available until the end of September, so we kept out fingers crossed that we’d be OK overnight, despite the weather. The Captain wasn’t terribly amused at having to walk a long way uphill on a walkway to reach fresh ground, either.