Sunday morning, and with a passable forecast we girded our loins and headed up the Northampton Arm of the Grand Union, tackling the remaining 16 locks in the Northampton Flight. It starts off easily enough meandering through the rural-ish outskirts of town, with a just a couple of locks. Then it reaches the M1, where it becomes the canal version of an express lift, with 14 locks and no respite. Ironic that you can see the Northampton Lighthouse if you can spare the time and energy to turn round.

They might be narrow locks (hooray) but having had it easy both engineering- and energy-wise for over a month, it was a struggle getting back into the swing of things, and the jolly old core muscles had a work out that they hadn’t had for ages.

Halfway up, one of the gates wouldn’t quite fully open, and despite just tentatively trying, we managed to get Song & Dance firmly wedged half in and half out of the empty lock. Cue much bad language, head scratching, engine revving and boat rocking before we managed to extract it, and retry with the (minimal) fenders up.

We’d hoped to get up to Gayton by lunchtime, but gave up and stopped in a lock for refreshments (very naughty, but no one coming), and by the time we’d pulled in at Gayton Marina’s visitor/service mooring to dump some rubbish and recycling, it was past three o’clock (there’s a song title in there somewhere). We also got a quizzical look from one of the marina staff when asked if we needed diesel anything, and we said “no thanks, we’re just dumping some rubbish and recycling”, then he asked slightly oddly if we needed any water while we there. With a “thanks, but we’re fine” we set off, and 200 metres down the canal, at the junction, we passed the Canal & River Trust waste disposal and water point that we should have been using. Sorry about that, chaps! 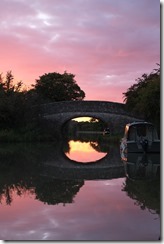 Still with no idea of where we were going now we were back in CaRT territory, we turned right at Gayton Junction, and continued on up the Grand Union that we’d left nearly two months ago. A little further up, we bailed out for the night and were rewarded with a splendid sunset.

We stayed over all day Monday too because the weather was unspeakably wet, and came to the conclusion that – despite the weather – we’d somehow stumbled onto the narrowboat equivalent of the M25. From late afternoon on Sunday through to the evening of a guy dreich Monday we reckon we saw more narrowboats on the move than in the entire two months we’d spent heading down to Ely and back. And schools are back, too!