The Quartermaster was severely disappointed at Tuesday evening’s shopping expedition, and Daventry had (speak it quietly) a branch of her favourite grocery emporium.  The local bus timetables are incomprehensible to visitors who don’t actually know the housing estate and street names, and they all seemed to wander lengthily around said places before ending up in Northampton. The locals we asked were equally clueless or reckoned it was almost certainly quicker just to walk into the town centre, so off we set on Wednesday morning for some retail therapy plus a free coffee and newspaper. Heavily laden with wine, a taxi back to the boat was the only option.

After lunch, the hatches were once again battened down for the transit through Braunston tunnel, then out into the sunshine where – teaming up with another boat – we made short work of the six wide locks down into Braunston – a major place in the history of the English canal system. We luckily found a suitable mooring right in the middle of the waterfront, outside the marina. There’s plenty to see, with boatyards, pumping stations and so on. 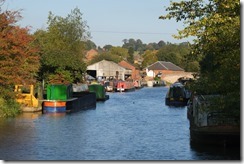 Despite her best efforts, the chief otter spotter was unable to locate any peregrine falcons on the church spire just visible in one of the pictures, unlike our visit last July. 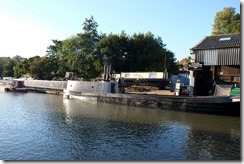