Moored up at the top of the Claydon flight of locks, not far from Fenny Compton and the lethal cider, the weather was still so nice that SWMBO went to walk off lunch while your scribe got out the deckchair and sat in the sun for a quiet read.

First interruption was a small party of Long Tail Tits moving down the hedgerow. For about five or ten minutes they chittered and squeaked no more than three feet from the chair. They really are very pretty little birds.

Next up was the unmistakeable sound of a vintage engine working hard. Turned out to be an old commercial tug plus butty carrying a full load of coal. They were destined for the Kennet and Avon! With the days getting shorter, and having to bow-haul the butty through the narrow locks, the K&A must be at least a week’s cruising away. And with all that crew on board, shipping coals to Newbury could hardly be a real commercial concern. 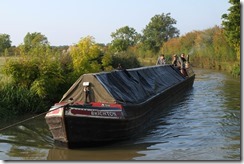 Finally, heard in the distance (twice) was what sounded like some seriously heavy metal going around or climbing out after a low pass at an air show. Couldn’t think of anywhere or anything locally, so went back to my book – only to hear a strange rumbling behind me…

And there, flying at not more than about 1000ft just behind the boat, was Vulcan XH558 herself, on one of her farewell tours. Always an impressive sight, it’ll be a real shame if they don’t find some way of keeping her flying. Being so close to Cropredy, it would be nice to think she could have even more farewell tours and gigs than Fairport Convention.