Apart from getting to Oxford for the Folk Weekend, at which the chief cook was supposed to be dancing, the rest of the summer’s activities were becoming as clear as the muddy canal water.

Plan A (back in the mists of time) was to head North and do some of the Pennine Canals: rumoured to be scenically splendid, and none of the crew had been waterborne up there before. However, the storms over the winter had left rather a legacy of problems, so this probably isn’t too good an idea at the moment, at least until things become clearer.

Plan B was to come down the Thames again from Oxford (for the third year running) –perhaps with a side trip up to Lechlade and back – then out on the Kennet & Avon Canal, with the intention of making it all the way to Bristol. Then a return to Reading and Oxford or – a very big maybe – prep the boat and hire a pilot for the tidal Severn transit to re-enter the canal system at Gloucester. Given the wet winter the Thames has been pretty flighty, and the Kennet can be a handful too, so this was looking a bit problematical.

Coming into Thrupp, we’d had some difficulty finding a suitable mooring: there were decidedly more boats than usual at this time of year. The Thames around Oxford had been on “red boards” (un-navigable) for several days, and clearly people were hanging around somewhere congenial until things improved.

Heading down to Oxford was by now familiar territory, and the mild but wet winter had not only helped the bird life, but for the first time for us, the towpaths were seriously muddy in places, the Cherwell was running high, and many of the low-lying fields were still awash with patches of standing water. So it was clear that even if the Thames came off red boards shortly, it was likely to stay volatile and run pretty fiercely. There was no slack in the land, and any more heavy rain would just sluice straight off the fields and into the river. So Plan B was looking a bit iffy too… We’ll clearly have to have some serious discussions with the Captain over the weekend.

But first, Oxford. There’s a 2 night limit on mooring in Jericho (convenient for the town centre and festival) after which they charge you £25 a night, and going down onto the other moorings on the Thames for the rest of the weekend wasn’t an option. So Thursday night was to be spent as close to Oxford as possible, to give us a quick run into Jericho on the Friday morning for the pick of the moorings. We’d have to take a chance on staying another night…

Unfortunately, beyond Kidlington, options are limited, as most of the towpaths on the outskirts of Oxford are either “conservation areas” or given over to the mysterious Oxford Agenda 21 Moorings. 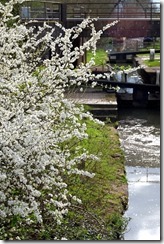 So we ended up bailing out at Wolvercote Junction, where The Dukes Cut branches off to the Thames. Looking unpromising on paper, the junction lies in the armpit of the major flyover joining the A34 and the A40 Oxford Ring Road, with a busy railway junction a mere 50 yards away. However, it proved surprisingly amenable if you looked in the other direction, and not nearly as noisy as we’d feared. You can see why the lock cottage has remained unoccupied for several years, though!

1 thought on “The Best Laid Plans…”