Monday morning saw a fairly leisurely shopping expedition round Banbury, then an undemanding meander through the outskirts for lunch at the place Biggles decided to swim the canal this time last year,  followed by moving gently on to a reasonably civilised mooring place just opposite the Pig Place in fairly unremarkable weather.

Tuesday and another amble to moor up just above Dashwood’s Lock, a pleasant spot in the middle of nowhere – after the busy-ness of Heyford Wharf, and before the excitement of Somerton and its Deep Lock. Wonder if Dashwood’s Lock is named after Peter Dashwood, a long time stalwart and regional coordinator of DEAFASS – The Dance Earnestly and Forget About Song Society? 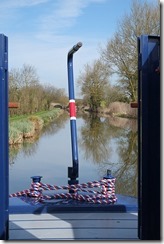 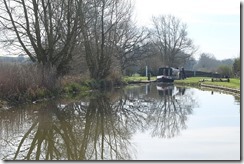 The trees are just starting to bud their leaves, the hawthorn’s showing white flowers, the fields of rape are pretty green and only just hinting at the garish yellow to come, while the sound of birdsong is everywhere – dawn chorus, dusk chorus, dinner-time chorus – you name it. 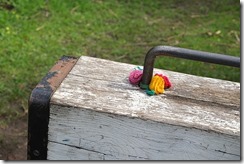 The weather was so pleasant that even the Captain came out to sniff the air before casting off. And walking up to the lock, we found some more knitted flowers on the lock balance beam: there were single ones on the Napton Flight heading uphill from Braunston to Cropredy last autumn, for no obvious reason. Clearly they’ve been breeding.

Buzzards seem to have been breeding too, because we always seemed to be in sight or earshot of one or two: if you click on the picture of Biggles on the roof to enlarge it, the small flea that looks bound for his ear is actually a Buzzard in the distance.

But although bright and sunny, it was cold… and nothing like the hot sunny weather at this time last year, when the deck chairs came out.

And as we travelled these fairly rural chunks of Oxfordshire, it looks as though the mild and wet winter has had a major impact on the bird life. Flocks of House Sparrows (often rare these days) seemed to be chittering in every hedge; we’ve never seen so many Robins chirping away, while the constant chiff chiff  chiff of the misnamed Chiff Chaff was ever-present (perhaps it’s an Oxfordshire dialect), and the unmistakeable cry of the Green Woodpecker came every few minutes. No Kingfishers spotted as yet, but some Kestrels, a Sparrowhawk, cormorants a-plenty and, of course, a Heron or three. And just passing through Somerton, we saw our first Swallow of the year. Heard plenty of Wrens too, but spotted only a very few. Compared to travelling this way at the same time last year, it really was a remarkable difference.

And so a satisfying few days meandering ended up in the busy waterway metropolis of Thrupp, and dinner at a favourite pub The Boat Inn. Can’t be bad.