Having moored up at a pleasant but otherwise unremarkable spot in the general area between Kirtlington and Tackley in an overcast and howling crosswind, the forecast sunny day arrived in spades, and what a delight. So nice that we just got out the deckchairs and went nowhere. Gave half the boat a bit of spit and polish, read a book, chatted with the occasional towpath user, drank beer…

On a nice warm day in Spring, a quiet part of the cut is hard to beat. The trees are just starting to tinge green with the leaf buds, while the hawthorn blossom frosts the hedgerows. 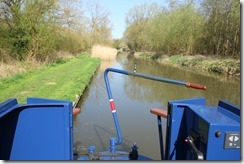 Over breakfast we watched a muntjac deer wander slowly and completely unconcerned down the copse the other side of the cut, beyond which some frisky foals could be just seen prancing around. (There are loads of muntjac near home, but they’re very shy and  largely nocturnal, so the occasional glimpse in the headlights or keeping well hidden in the undergrowth is about all we’ve seen). All the LBJs were flitting around and singing their hearts out; there was never a moment when there wasn’t a buzzard or red kite circling overhead, and sometimes both. Loads of honking from unseen pheasants, and a pair of mallards wandering around house hunting. Even the occasional poor perisher in a light twin struggling with single engine approaches into Oxford Airport didn’t really detract from the peace.

And then to finish off in style, as dusk turned to dark there was a splendidly visible fly past of the International Space Station, with loads of bats flitting around, and the pheasants still calling like mad. A wonderfully surreal end to a really Bright Sunshiny Day.