Sunday morning dawned bright and sunny as promised, but instead of the early start, 10:00am found the first mate scouring Banbury’s DIY sheds for the requisite plumbing bits to solve the dirty dishwater flood, while chief cook was washing all the dirty towels used to mop up last night’s floods. Fortunately, we still had a car at Cropredy, and the sheds were the near side of Banbury, only a few minutes away by car. However, after masterful plumbing instruction from Biggles, by lunchtime, we were ready to resume departure preparations, settle up our account, and say farewell to the helpful and friendly Marina people.

For Christmas, the Captain had generously bought us some fancy new red white and blue mooring ropes (apparently known as warps), to match Song & Dance’s colour scheme. They look very smart compared to the old black and rather travel-stained ones with which we ended last year. Wonder how long they’ll look smart given the mud and crud they inevitably pick up. Still, it was a lovely thought! 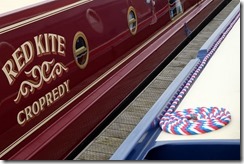 We said “goodbye” to our starboard neighbour, who’d been keeping an eye on the boat for us: Michael’s doing his boat up, and is one of those interesting people you meet on the canals. Once upon a long time ago he was soundman for Joe Strummer and The Clash; moving to New York he became heavily involved in the recording of Paul Simon’s Gracelands; he is now working part time in Banbury’s Oxfam record and book shop, while doing a PhD in Italian Renaissance Gardens at Rome University having turned down Oxford’s offer; he is good mates with all the Fairport / Cropredy crew and about to set up a radio station for the local Banbury Patriots footy team. You couldn’t make it up.

There’s a gap in the boats on the far side where our sister boat Toulouse normally resides, so we guess they’re out on the cut somewhere: the owner introduced himself last time we were up and was especially interested in how much we paid for Song & Dance… modesty forbids: it would only upset him!

And despite several visits over the winter, we have never met the owners of Red Kite, our port-side neighbours, even though we nearly T-boned them the first time we headed down to Banbury, back in 2014.

It was early afternoon by the time we got away, the sun had gone in – shame – but we had a pleasant and undemanding trip down to moor at Spiceball Park, pretty much in the middle of Banbury. 10 minutes by car. Several hours by Song & Dance. After the trials and tribulations and a long day, a visit to Pizza Express for a discount offer meal and bottle of wine seemed well deserved.

And funnily enough, without conscious effort, we’d set out on our summer cruise on April 10th, the same day as last year. Another omen?