Tuesday morning, and the Jericho towpath was abuzz. The Thames was definitely coming off red boards according to the lockkeepers down at Osney lock. Our friends Baguette and Tuesday Night headed off down onto the river, and some boats came up. It was time to be off. Locking down through Isis Lock onto Sheepwash Channel (technically part of the Thames) to turn the boat round was complicated by a dead narrowboat occupying the pontoon provided to make access and turning easier. Struck down by the dreaded “diesel bug” just exiting the lock, he’d been there for a couple of days, but there was an engineer with some fancy polishing equipment, so we guess he wasn’t going to be there too much longer.

We needed a pump-out soon, but College Cruisers – just opposite where we’d been moored in Jericho – seemed moribund on the Tuesday morning, so we were aiming to get to Thrupp, where there are also suitable facilities. We’d hoped that news of the Thames freeing up had reached there, because moorings were in short supply when we came down.

There’s a long stretch of canal around Thrupp where the moorings are managed by/devoted to members of the Thrupp Canal Cruising Club – public moorings are a bit at a premium. We did indeed meet a few boats heading down to Oxford and the Thames, but there were no free public moorings, so we pulled in to the service quay, prepared to move on afterwards out into the sticks of Shipston-upon-Cherwell for the night.

On chatting to the TCCC chap who came to ask if we needed anything, we told him we needed a pump-out, and asked if he knew if there were any mooring we might use for the night. “I know all of the 14 day moorings just up there are full, but if it’s only one night, just pull the boat round the corner up tight to the next one.” A highly convenient and amenable spot, close to a garden the the Captain had favoured before. He was most pleased. 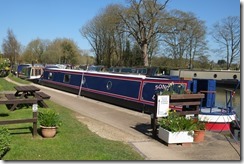 On thanking the TCCC chap, he said “We do try to be friendly and helpful” in a manner that suggested perhaps they were often accused of being the opposite. Still, no complaints from us!

So – it’s a hard life – it was another trip to the The Boat Inn for dinner. Having had a splendid chilli there last autumn, we both decided another was in order. They must have changed their chef: still very tasty and splendid, but now decidedly a “light blue touch-paper” two to three hanky chilli, and we’d only one between us. C’est la vie.