Thursday’s plan was to cruise to the end of the summit pound and get down the Napton flight (some 9 narrow locks, not a huge challenge). On the way, there was one chap who had clearly gone to extremes to avoid paying CaRT any licence fees, by digging a one boat marina then blocking it off…

Must make cruising a time-consuming business.

Arriving at  Napton Top Lock at lunchtime, there was a queue of boats waiting to go down: apparently there had been some kind of problem/blockage in the morning. Now sorted, the boaters remaining didn’t actually know what the problem had been. Bit like a long motorway queue that just peters out, having been backing up for no obvious reason – vaguely frustrating.

After the first two locks, the weather was looking less than inviting, and there were pleasant moorings by the Old Engine Arm, so the Captain suggested we bail out for the day. 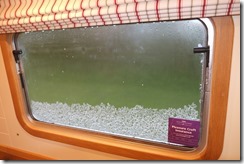 His weather sense was impeccable: a little later that afternoon we had snow and hail.

Friday dawned sunny but cold, so we set off down the remaining locks, aiming to get croissants and coffee for second breakfast or first lunch at the rather fine village Post Office/Village Shop/Newsagent/Cafe 10 minutes walk from the bottom lock.

It might have been sunny, but there was a strong and bitterly cold cross wind making life difficult. Although there are plenty of visitor moorings somewhat below the bottom lock, just above there are about three splendid ones with lovely views across the water buffalo fields to Napton-on-the-Hill, and within 50 yards of The Folly, a quirky but ultimately splendid hostelry. One of the moorings was free, and there was a queue for the bottom lock and facilities. A no brainer: we moored up, booked a table for dinner, and shrugged at the thought that it was going to take three days to descend Napton Locks. 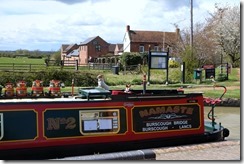 Namaste was selling Jack Russell dogs, and just below, moored next to each other were Ollie Owl and Wayfromit Owl  (groans are allowed) and a flag reinforcing the Captain’s decision not to brave the cross wind any further.