Saturday morning, and as Anglo Welsh didn’t want to sell us any diesel, we left their basin via the Wooton Wawen aqueduct, which unusually has a lowered towpath, like a couple of others on the Stratford Canal. “Why don’t you go ahead and take some low-level pictures of Song & Dance crossing the aqueduct…” said the chief cook. 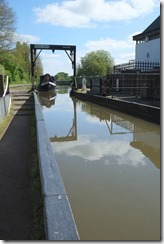 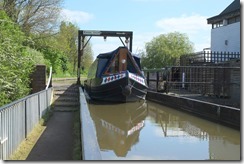 A nod’s as good as a wink to a blind something-or-other, but just as the money shot was coming up, a certain Captain of our acquaintance announced that he’d left his reading classes behind, and was going back to fetch them. So we had to reverse out and moor back up again while he sorted himself out. The moment had gone. 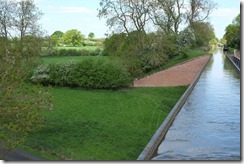 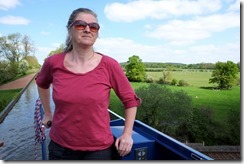 A little later comes Edstone Aqueduct: a much more serious affair if not quite in the Pontcysyllte league. Edstone’s the longest aqueduct in England, and the helmsman stood firmly to port and bravely gritted her teeth avoiding looking at the vertiginous drop to starboard. 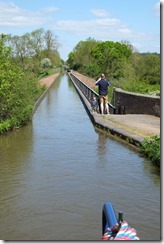 Mooring up at Wilmcote, we headed into the village for provisions. Mary Arden’s Cottage on the way to the shop has always been firmly on the Shakespeare Heritage Trail, but it seems to have metamorphosed into “Mary Arden’s Working Tudor Farm” and become a small theme park in its own right. Not wishing to stump up the extortionate fee to wander round, we retired to The Masons Arms for a proper pub lunch.

The cottage itself still looks splendid from the road, for cheapskates like us. 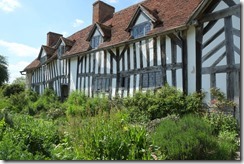 Suitably refreshed culturally and alcoholically, we re-joined the Captain and continued down the Wilmcote flight of locks, which end just outside Stratford-upon-Avon, and moored up at the bottom. We’re slowly getting better at guessing whether Sir likes a mooring spot or not (and it isn’t always obvious), and he seemed most content with this spot, despite being close to a major road.