Falling Sands Lock is a pleasant enough spot if the wind’s in the right direction… it’s just next to the sewage works.  Setting off on the Saturday morning, we remembered the lock well, as we’d come to blows the last time we were here, a few years ago. 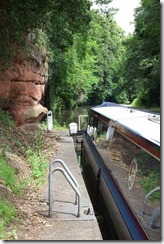 If you’re coming down from Kidderminster you approach the lock entrance/top gate on a bend. Concentrating on trying to get the boat approximately lined up with the lock, we failed to notice that the gate hadn’t opened quite all the way, and with a modest burst of power to straighten things up, firmly wedged the boat in the lock entrance.

The geometry was such that the front rubbing strake had climbed up on top of the top gate walkway, and despite much creative use of engine revs, barge poles, paddle manipulation and multi-lingual swear words, we were well stuck.

Can’t remember how we managed it in the end, but it took well over half-an-hour to extract the boat, and about the same to dig out whatever was stopping the gate fully opening in the first place. What jolly japes.

Coming up, we couldn’t help noticing that there were now three ways to cross the canal at the bottom of the lock.

The furthest downstream was accessed by the old and well worn stone steps; from the brickwork, the parapet had clearly been added later. There was also a rope slot down the middle. Then there was the metal walkway, clearly added later, that may have had a rope slot, now blocked up. And then there was the usual walkway across the bottom gates.

With some locks one struggles to find a single way across the bottom, so I wonder why they felt three were needed.