Just under Maesbury Bridge was a service point, and we needed water, so we popped over. Having been out since just after Easter, Song & Dance is looking a bit travel-stained, especially the roof, and we were hoping to at least give the top a wash down with a decent water supply. But just as we’d finished topping up the water tank, another boat arrived wanting some, so we did the honourable thing, and moved on without the wash and brush up.

Pottering on from Maesbury Marsh services all of a half a mile, we felt obliged to have Sunday morning coffee at “Canal Central”, and the cook insisted on finding some carrots for Cracker the horse (who incidentally has his own column in Towpath Talk). Then there was a long-haul trek – all of another half a mile for the round trip – to  wind the boat at the current limit of navigation, Gronwyn Wharf, and moor back near the Canal Centre for the night. We did say we were going to chill out for a few days! 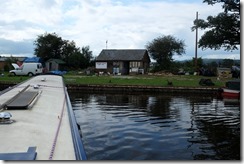 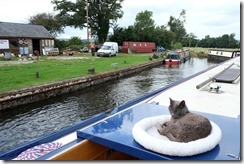 There’s a rather odd boating bits and pieces establishment at Gronwyn Wharf, but Sir was unwilling to spend any money, preferring instead to audit the winding exercise.

This journey means passing twice in quick succession through a heavy lift bridge with a rather stiff hydraulic mechanism. Having nearly done himself an injury on the way down, the FO decided that it was the perfect opportunity for the head gardener to tone up those core muscles. 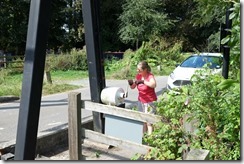 Albert Einstein had his own views on tidiness, (sometimes misquoted as “A tidy desk is a sign of a diseased mind”) so we wonder what he’d make of Song & Dance’s clear roof policy. Cracker and his staff take the opposite view. A boat with stacks of wood, coal and washing machine parts on the roof, coupled with a wind turbine mast and a TV aerial suitable for getting a signal from Outer Mongolia is nothing but but a serious pain in the fetlocks. We hope they approved of Song & Dance’s clear if rather unclean top! 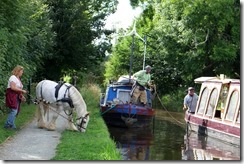 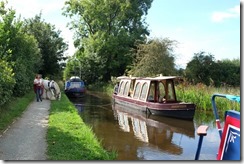 Monday morning was, er, leisurely, and after a late and protracted coffee and cake at the Canal Centre, we bid farewell to Cracker, and finding the service point unoccupied, embarked on a wash and blow dry. Halfway though, a boat heading down to Gronwyn enquired as to our intentions, as they were about to turn round there and wanted water; they arrived back just as we were casting off. Result!

Mooring a little further up, in the middle of nowhere somewhere below Aston Locks, having covered a total of 1.3 miles, there was little inclination do much more.

On Tuesday morning we were relieved to find that all the paintwork at Aston Locks had dried, and decided it would be rude not to at least have a snack lunch at The Queen’s Head at Queen’s Head before heading back to Perry Aqueduct and finding our favourite mooring suitably vacant. Mind you, the chill-out factor was seriously damaged by the complete impossibility of contacting CaRT to book a passage back up Frankton Locks…

And so on Wednesday, our lazy diversion down the Montgomery came to an end as we turned up at Frankton Locks ready to rejoin the hurly burly on the Llangollen again. There was a house for sale right by the locks that looked rather fine, but we’re not sure even Biggles needs seven bedrooms (plus, it turned out, a sizeable brick cowshed/office suite, a private nature reserve, observatory, hide, and 9 or so acres of grazing along the canal). And remarkably cheap: we were sorely tempted…

The lockkeeper unlocked the lock’s padlocked paddles three-quarters of an hour early, and – second in the queue – we were back on the Llangollen at 12:00, despite going aground in one of the pounds which was a bit low. A hour and a bit’s cruise over very familiar territory, and we were once again tied up in Ellesmere Arm, ready for another assault on Tesco. The Captain was most happy.