After another brief but pleasant stop over in Ellesmere, variously taking in a manicure, a massage, an art gallery, another cheap Indian restaurant deal and some serious present shopping, we finally started heading back towards “civilisation” on Friday morning. We’d promised ourselves that we would finally (after many, many years) go and have a proper look at the Whixall Moss but it was the middle of the day, and we didn’t really see anything remarkable. 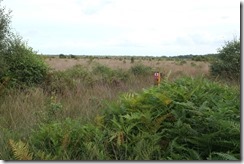 It’s very flat – a raised peat bog – with some big skies. Grand dog walking paths, if we had a dog.

The sun came out, and following a wide mown path that looked as though it would take us directly back to the canal, after a mile or so, it got narrower and narrower, until it was barely followable among the high grasses and boggy areas, and we were skipping from wet hag to wet hag. We should really have gone back, but it was a long way. Persevering, and getting wet feet, we ended up back on the main path near to the boat, right by the second photo. The sign – just visible from the main path, says “No Entry – Sensitive Ground Flora”. Ho hum.

After all that exercise, we didn’t go much further, and moored up for the night at what used to be the “Garden Shop”: a shed in a large rural garden run by a couple of old chaps that sold milk, local meat, bread, ice cream and other essentials. Alas, no more, and the once  direct access from the canal into the garden is just a huge overgrown patch of scrubland, bushes and nettles. Sir found plenty to explore but we didn’t.