Seems that as well as the boat gathering, the local folk club had organised a session on Saturday afternoon outside the community cafe at the mill, and a boating songs/shanty session inside on Saturday evening, at which another well known folky and boater Tom Lewis would be singing and the ex canal laureate Jo Bell would be reading her poems. We’d seen Tom recently, and he was excellent, and we’d also spotted his boat moored up, so that wasn’t a surprise. Hence the plan was to try and stay another night locally, presupposing we could get moored somewhere reasonably close. We’d kindly been offered a spot breasted up against another boat, but that one really wouldn’t have been suitable for the Captain to go out in the dark.

Well, we were up at OMG o’clock, showered, breakfasted and ready to roll at 08:00 – no mean feat after a late night – but there was no sign of any CaRT people coming to move their work boat. We eventually decided to move anyway at about 09:15, and as we were casting off saw a posse of CaRT volunteers crossing the bridge. If we’d known, we could have had another hour or more in bed. Mutter, mutter.

Anyway, we found some very nice moorings about half a mile down the cut, in nice countryside, so all was well.

We dropped in on the afternoon session – that’s Charlotte chatting to the head cook rather than playing her fiddle, and Jason on her left. 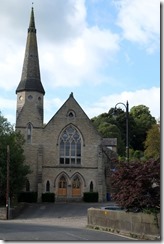 Bollington is an interesting hill town, with a real community spirit, and seems to be known locally as Happy Valley. The aqueduct looks much more impressive from below than it does above, the church has a fine example of one of those octagonal spires that seem to crop up around hereabouts, there’s a decent large Co-Op, a super delicatessen, a frequent bus service to Macclesfield, and plenty of yummy mummies and daddies wheeling their progeny around. Surrounded by lovely views of the peak district, we could see why it was popular. 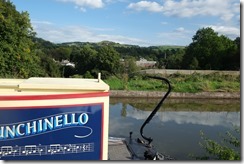 We were a bit puzzled by the house name and wondered what someone had done to deserve that (click on the picture if you can’t read it). And climbing back up to the canal, we took our eyes off the view just long enough to decide that the music score on Punchinello was either by a signwriter who’d just sprayed random musical typography across the stave, or it was a ditty knocked up by Karlheinz Stockhausen on an off day. (Our standards here are high: very early on in Song & Dance’s travels we passed a boat Baker Street, where the side of the boat was correctly decorated with the music for that saxophone break’. We were impressed).

We wandered back for the evening do; the place was mobbed, and the event would have been excellent apart from the fact that the air-conditioning was going full blast – like a Lightning with it’s after burners lit, making it difficult to hear well. Tom Lewis was expectedly good, and – not being poetry fans – Jo Bell was unexpectedly superb. Another late night. And back home quite a long way down a dark towpath: haven’t done much of that for a while. Winter drawers on: must remember a torch next time!

1 thought on “A Musical Interlude in Happy Valley–Part 2”