After our gentle amusement at sheep snoring, and the blowout meal, we weren’t terribly early in getting going on Friday morning; we’d decided to take a look at the proceedings at Bollington – not very far away – and maybe stay there overnight. As we approached the town, the first thing we saw was a notice pinned to the fence with a face on it. Half expecting it to be wanted man notice, we nearly ignored it, but on closer examination while passing it said “Bollington Folk Club, Friday 16th September, special guest Pete Coe”. Pete has been a dear friend for rather more years than either of us would care to remember, so the decision to stop the night was a given, really. Particularly when we found out the relevant pub was only five minutes walk from the canal. Such is the serendipitous nature of the waterways. Mind you, ever since Pete and his wife Sue were awarded EFDSS Gold Badges, we are really not worthy to be in his company any more…

Turned out that the Bollington boat meeting was organised by the local towpath society, who’d invited several historic boats, including Betelgeuse and the wooden boat Hazel  (seen below). 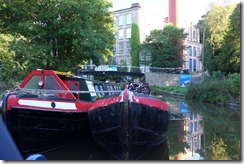 Betelgeuse had obviously leapfrogged us on Thursday evening, as she was already there. And Dr. Google suggests she is a historic boat too, but not wooden. We think Charlotte & Jason’s tug may be wooden but didn’t get a close look as it was moored outside Betelgeuse. 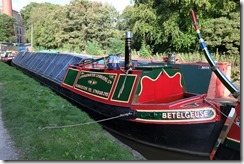 As more or less expected – all the moorings on the Aqueduct and by the old mill were taken or reserved for boats attending Saturday’s fun. The Harbour Master said we were welcome to breast up with a work boat that CaRT had carelessly left behind in the middle of the mooring area (left hands and right hands??), but we’d have to move early on Saturday as they were coming to move it at 08:00. Gulp.

Sir was intrigued by breasting up and having to climb over another boat to get ashore, but took it in his stride. There was lots of boats around and “hail fellow, well met” stuff going on, and the towpath was quite busy, so when a large untethered dog came bounding up to investigate, we were surprised that Biggles just stood his ground and bristled a bit, while continuing to keep his head down munching the grass, as cats do. Normally he would just beat a quiet retreat to the safety of Song & Dance – his own territory – and we suspected the work boat was fazing him.

Not a bit of it! On closer examination after canine removal, he appeared to be tucking into a bowl of tinned salmon – clearly much tastier than his usual carefully balanced prescription diet for duff kidneys – and he had absolutely no intention of letting any miserable dog have any. Turned out the occupants of Hazel thought Sir was a skinny, underfed stray (the shame of it) and put down some food for him while we weren’t looking.

Anyway, dinner in The Vale Inn (run by the brewery across the road) was excellent. Pete Coe was on splendid form (we are not worthy…), and the Captain enjoyed the novelty of two boats to wander around at night – one full of puddling clay. So if the Macclesfield Canal develops another leak due to clay contamination, we’ll know who to blame…

1 thought on “A Musical Interlude in Happy Valley–Part 1”