Having eschewed the delights of Congleton (the town centre is quite some way from the canal), the chief cook decided that we needed some provisions before we hit the delights of Kidsgrove and Stoke on Trent, and suggested we stop at Henshall Bridge, as it was close to a farm shop she fancied checking out. 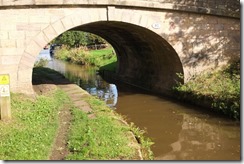 It was a good spot to take a picture of a Macclesfield Canal bridge: they’re rather unusual in that instead of the walls dropping vertically from the widest part, they start curving back as though they completed a proper ellipse under the canal. This, coupled with wide towpaths under the bridges, make them appear wide and easy to navigate. Wrong! If anything they’re even more of a challenge than the narrow ones on the Stratford Canal earlier in the summer – there’s a small underwater ledge on the other side to catch you out too.

After lunch aboard, we got chatting to a couple of anglers. One of them remarked that it was nice to see a Piper Boat, and told us that he used to work for them some years ago. As was now his regular practice whenever we started gossiping on the towpath, the Captain came out to join us, sitting in the middle of the towpath. Getting bolder during his travels he’s become almost immune to passing dogs, even if we were a bit surprised how he stood his ground at Bollington.

We were even more surprised when four young whippets came bounding along, two attached to a young lady by leashes, two running loose, and he didn’t even bristle much. He just stood in the centre of the towpath and glared at them… and they slowly took a wide detour round him before carrying on their bouncing progress.

“Blimey” said the angler “that cat of yours is well hard, isn’t he…”

Anyway, after the demonstration of his evil eye, he sloped off and went for his afternoon nap while we headed off for Astbury and the farm shop, which proved even further from the canal than Congleton town centre. Must have words with the shopping planner. Actually, it wasn’t so much a farm shop as “tourist attraction” in its own right, with a petting zoo, café, several art and craft shops and a butcher, as well as selling produce from the farm.

After a lengthy examination of all the shops selling things you never knew you didn’t need, buying some food, and partaking of coffee and cake, the chief cook then announced that we would take a wander around Astbury, which proved a pleasant and picturesque village albeit with the A34 running down the other side. 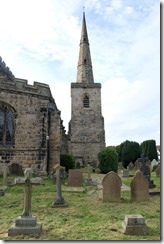 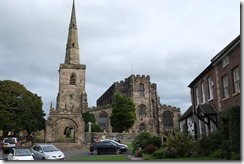 The church looked interesting, with its bell tower and steeple built off to one side, but it was all locked up so you’re spared any more pictures of ecclesiastical ceilings. 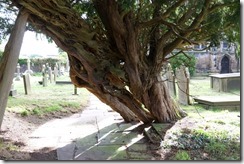 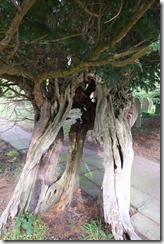 The yew tree in the churchyard looked even older than the church, although the original trunk was looking a little too well ventilated to provide decent shelter from the elements. 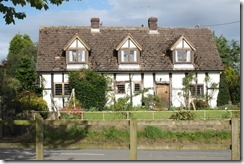 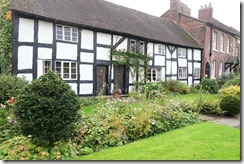 Madam was most taken with the cottage with the dormer windows, and there were several others that also caught her fancy. 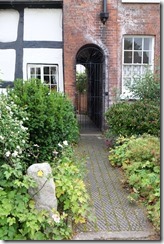 If you click on the above picture and look at the stone by the path, you can see that this gated passage isn’t just a way of getting to the back yard, it’s a public footpath to somewhere. 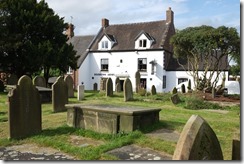 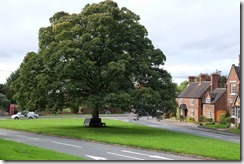 Complete with a village green sporting a splendid oak tree to sit under, and a nice looking inn opposite the church, one can’t help suspecting the house prices in Astbury are steep even for Cheshire. Shame about the A34 though.

Anyway, by the time we’d done all this and walked back to the boat, it was too late to cruise on. Guess we’ll just have to open a bottle of something and stay the night.